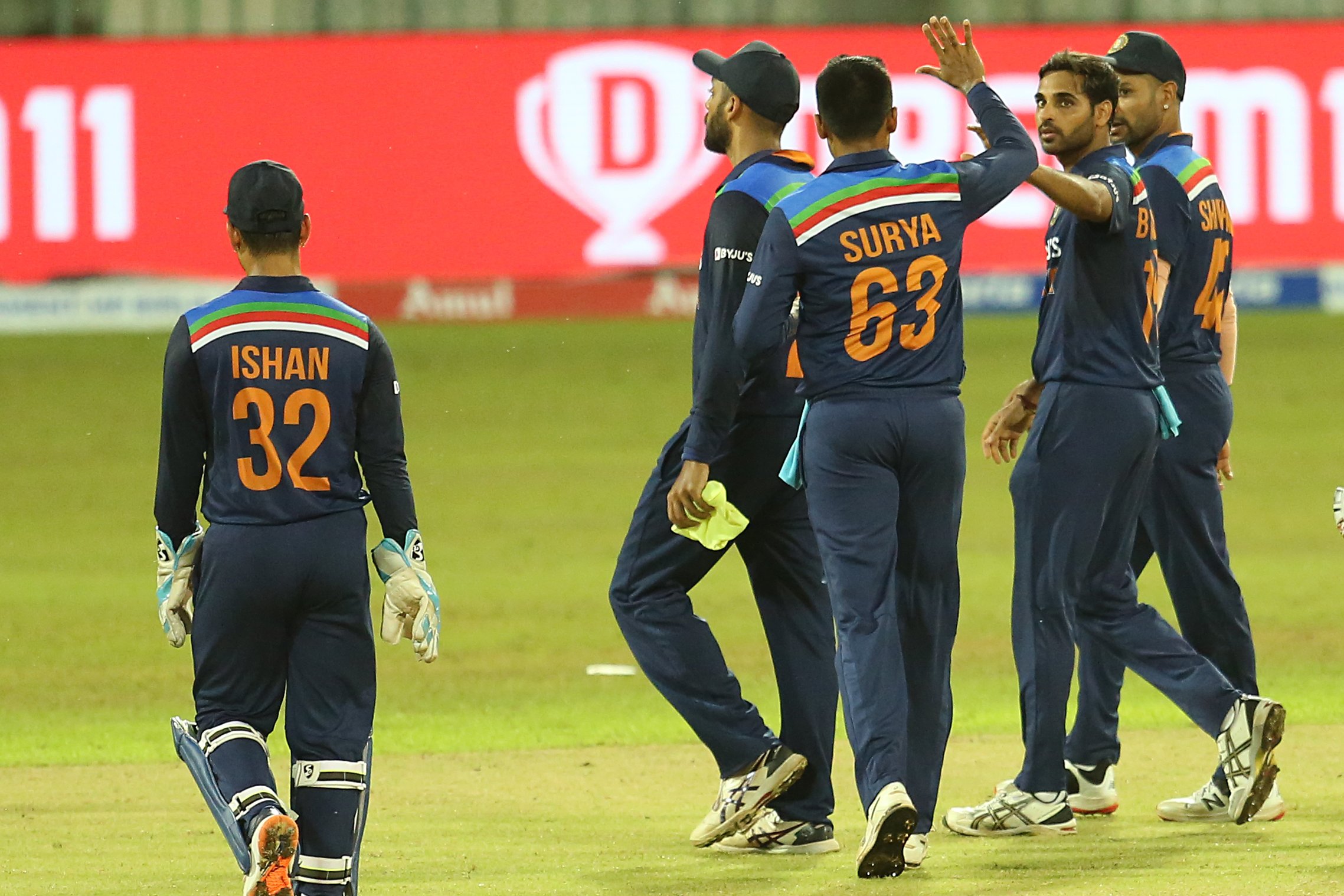 Colombo: Suryakumar Yadav’s golden run with the bat was beautifully complemented by the Indian bowling unit led by Bhuvneshar Kumar as the visitors outclassed Sri Lanka by 38 runs in the first T20 International here on Sunday.

In what will be the final international audition before T20 World Cup, Chahal gave his all in presence of IPL star and debutant mystery spinner Varun Chakravarthy, who as per grapevine could be the Indian team management’s choice for the marquee event.

Chahal not only bowled 10 dots apart from the ‘jaffa delivery’ to dislodge Dhanajaya de Silva but also bowled a superb 15th over that turned the course for India with only three runs conceded.

After a whirlwind start in the first two overs, Dhawan introduced Krunal Pandya (1/16 in 2 overs), who quickly removed Minod Bhanuka. Chahal arguably bowled the delivery of the match — a flighted delivery foxing Dhananjaya de Silva (9) to play inside the line to get castled.

Last ODI hero Avishka Fernando (26) also paid for slowness of the track as he tried to pull Bhuvneshwar.

However, debutant Charith Asalanka (44 off 26 balls) had other ideas as he launched into opposition rookie Chakravarthy (1/28 in 4 overs), smoking him for two sixes into cow corner even as his partner Ashen Bandara (9 off 19 balls) struggled at the other end.

Bandara’s misery was ended by slow off-break from Hardik Pandya (1/17 in 2 overs) but Asalanka kept Sri Lanka in contention with some big hits before being dismissed by Chahar.

Earlier, Suryakumar continued his rich vein of form and was supported by useful contributions from skipper Shikhar Dhawan (46 off 38 balls) along with Ishan Kishan (20 not out off 14 balls) at the back-end.

But looking at the partnership, it was evident that the junior partner was batting in a more assured manner, having already sealed his place in the T20 World Cup team while the skipper is still fighting what looks like a losing battle to jostle inside that jam-packed top-order in the main squad.

There was a six over deep mid-wicket off Akila Dananjaya but the innings did lack the punch despite four more boundaries.

It was Surya’s five fours and a six that really helped Kishan and Hardik to launch the final assault.

At the start, Prithvi Shaw had a forgettable T20 International debut as Dushmantha Chammera’s (2/24 in 4 overs) outswinger found the edge of his bat off the very first delivery of the match.

Sanju Samson (27 off 20 balls) hit his customary six while batting like a millionaire before Wanindu Hasaranga (2/28 in 4 overs) trapped him with a googly.

Surya as usual was in his free-flowing self, hitting those whiplash on-drives, cover drives and ramp shots which is a sight to watch both against pacers and spinners.

However, what was exhilarating was how Surya picked all those back-of-the-hand slower deliveries from seamers Isuru Udana and Chamika Karunaratne.

Udana was dispatched with a conventional sweep shot for boundary while Karunaratne was slog swept for a six.

When Hasaranga came for his last over, he went inside-out to loft him for a straight six to complete his fifty but the leg-spinner had the last laugh as he was not afraid to flight once more and this time the inside-out chip shot didn’t have required wings to soar over the ropes.

His dismissal did rob India a chance to score 175 plus.