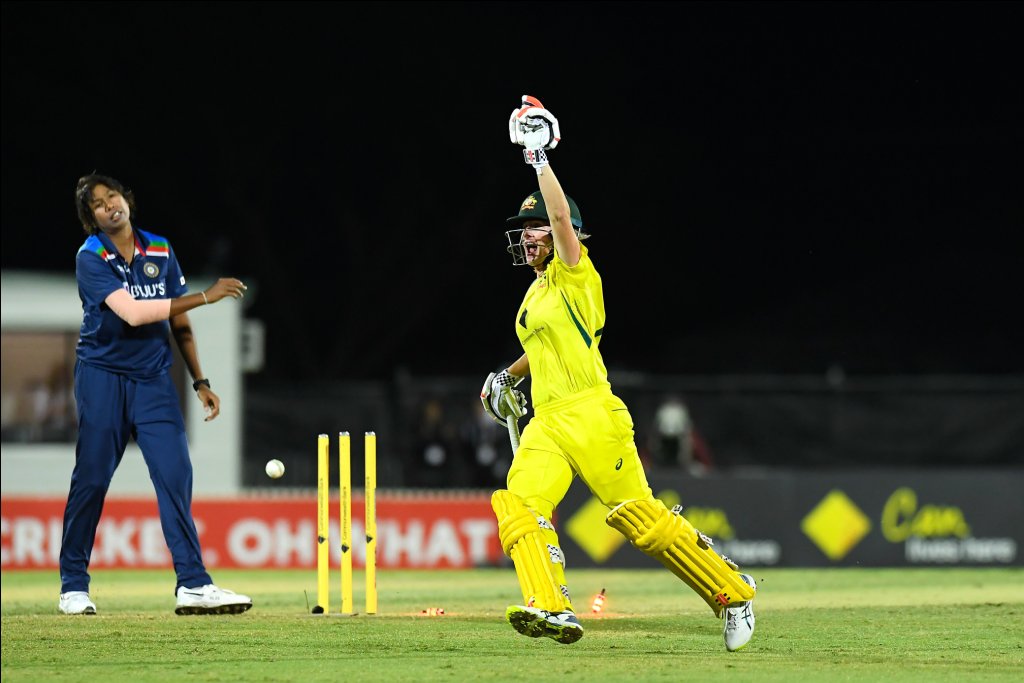 New Delhi: India and experienced bowler Jhulan Goswami failed to keep their nerve in a dramatic final over as Beth Mooney’s brilliant unbeaten hundred ensured a five-wicket win for Australia – their 26th on the trot – in the second women’s ODI in Mackay on Friday.

Australia have now won two of the three ODIs in the multi-format series and India’s bowlers will be forced to go back and introspect on their performance.

It was a match that was seemingly in India’s pocket till the 25th over of the Australian innings but Mooney, with an unbeaten 125, stunned the visitors as the hosts completed the third-highest chase of all-time in women’s cricket by knocking off the target of 275.

In fact, the Indian team prematurely celebrated when Goswami’s waist high full-toss was hit straight to mid-wicket by Mooney but, to their horror, it turned out to be a no-ball. It was marginal as Goswami’s last ball was sent towards wide long-on for a couple to finish the match.

Keeper Richa Ghosh and Poonam Yadav were put under extreme pressure as they got five off first two and Goswami accidentally bowled a beamer that hit Carey flush on the helmet with the umpire rightly signalling a no-ball.

Ghosh’s inexperience was once came through as she missed a run-out when five were required off last two balls as the no-ball drama changed the course of the game.

But it was perhaps the poor show by Indian spinners Deepti Sharma and Poonam Yadav that allowed Australia to make a comeback in the game after being reduced to 52 for 4 early on.

It was the highest total scored against Australia since their winning streak started in 2018 but the Indian bowlers undid all the good work done by the batters in the second half of the Australian batting effort.

Goswami bowled an absolute ripper that cut Alyssa Healy (0) into half while skipper Meg Lanning (6) was dismissed by Meghna Singh when Rajeshwari Gayakwad took a fine catch in the deep.

Puja Vastrakar then effected a diving run out of Elyse Perry while Gayakwad got her name on wicket-taker’s list to see the back of Ashleigh Gardner to have the Southern Stars reeling.

Mooney and Tahlia McGrath (74 off 77 balls) consolidated in style during a 126-run fifth-wicket stand. While Gayakwad was steady with her wicket-to-wicket line, young Meghna and seasoned Jhulan also tried keeping things tight.

India finally had some luck going their way when Sharma’s half-tracker was hit straight to Yastika Bhatia, at short fine-leg, by McGrath.

However, in the 42nd over bowled by Vastrakar, the seasoned Mooney got two boundaries to put Mithali Raj’s team under real pressure.

Mandhana hit 11 boundaries to register her 19th half-century after the visitors were sent in to bat. She shared two crucial partnerships – 76 runs with Richa Ghosh (44) and 74 runs with Shafali Verma (22) – to help India set up a good total.

India were given a flying start by Mandhana and Shafali (22) as they raced away to 68/0 in the first 10 overs, their best opening stand in the 10 ODIs they have played this year.

But the threatening opening stand was soon broken by spinner Sophie Molineux in the 12th over as she dismissed the latter.

A mix-up then led to skipper Mithali Raj’s (8) run out followed by Yastika Bhatia’s (3) departure as the hosts made a strong comeback.

Mandhana and Ghosh then steadied the ship, keeping the scoreboard ticking but the opener sliced it straight to point which marked the end of her innings.