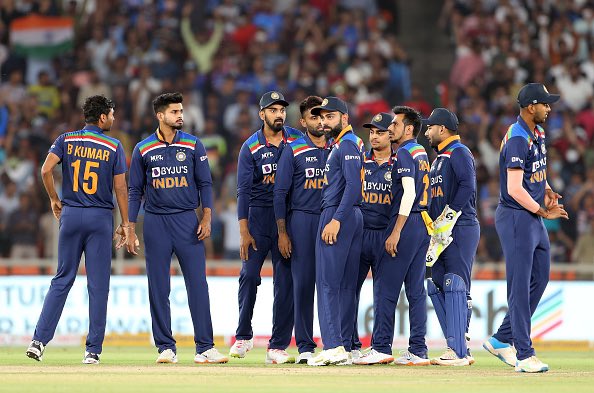 Ahmedabad: Buoyed by an impressive seven-wicket win in the second T20 International, India will take on England in the third game of the five-match series with renewed confidence here at the Narendra Modi Stadium on Tuesday.

The hosts, who had lost the first match by eight wickets, bounced back thanks to impressive bowling in the death overs and power-hitting by debutant opener Ishan Kishan, who made a 32-ball 56.

The third match will be played on a surface that is likely to assist spin bowlers, according to England captain Eoin Morgan.

India bowlers will again look to use the change in pace, a quality that confounded the England batsmen. Only opener Jason Roy could put up something decent, making 46 off 35 deliveries, even as the other batsmen struggled to convert their starts as the Indian bowlers used variations in pace to dismiss them.

If the pitch helps the spin bowlers, there could be a chance of India bringing back Axar Patel into the squad. The left-arm spinner, who was India’s star performer in the Test series with 27 wickets in three Tests, was left out of the squad for the second T20I after he was taken for runs in the first game. But a pitch aiding turn and England’s frailties against him, Patel could be drafted in.

India will most likely see the return of opener Rohit Sharma, who was rested for the first two T20 Internationals. Sharma will replace out-of-form KL Rahul and will open with Mumbai Indians teammate Kishan.

England have a few worries to deal with. With Mark Wood, who paired up with Jofra Archer well in the first T20I, missing the second game due to injury and there being no surety of his availability for the third match, Morgan’s team may draft in Moeen Ali. Pace bowler Tom Curran was expensive and was taken for runs by Kishan.

Ali’s case could also be aided by a pitch that is likely to help the spin bowlers.

Dew will also be a factor, making chasing a bit easy, although Morgan had said that dew wasn’t there in the previous match.