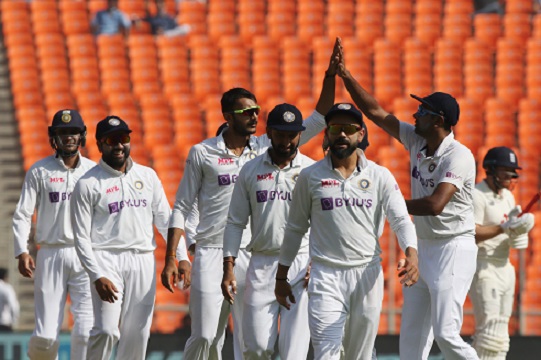 Ahmedabad: England were bowled out for 205 runs on the opening day of the fourth Test against India at the Narendra Modi Stadium on Thursday.

Rohit Sharma (8 not out) and Cheteshwar Pujara (15 not out) were at the crease at the close of play.

England won the toss and chose to bat.

Left arm spinner Axar Patel (4/68) struck early in his spell sending both Dom Sibley (2) and Zak Crawley (9) in the pavilion in the 8th over the innings. Pacer Mohammed Siraj (2/45) then trapped  captain Joe Root (5) in front.

Ravichandran Ashwin (3/47) was also among the wickets. Washington Sundar (1/14) also chipped in.

Earlier, Ben Stokes (24 batting) and Jonny Bairstow (28 batting) the managed to steady the ship with an aggressive approach, taking England to 74/3 after 25 overs.

The visitors are trailing the series 2-1 and are looking to draw level while India are looking to avoid defeat and qualify for the World Test Championship final.

England have won the toss & elected to bat against #TeamIndia in the 4⃣th @Paytm #INDvENG Test in Ahmedabad.