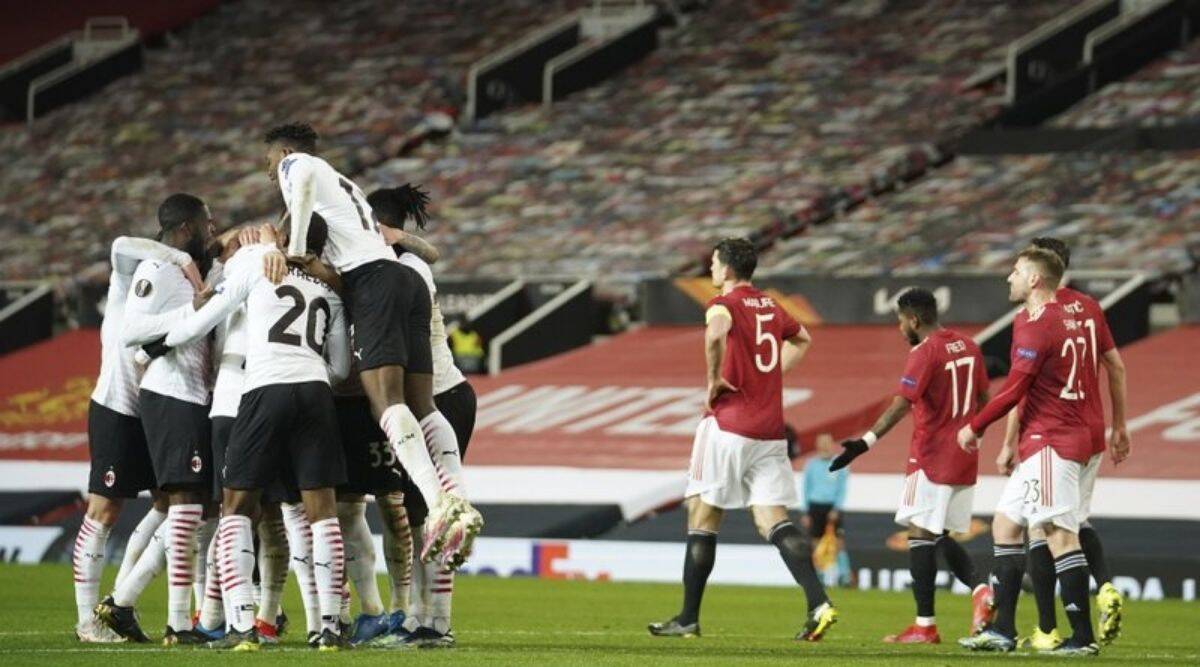 New Delhi: AC Milan defender Simon Kjær scored in injury time Thursday to secure a 1-1 draw at Manchester United in the first leg of the Europa League’s round of 16.

Kjær capitalized on poor defending to head in a corner in the 92nd minute to give the Italian side a slight advantage ahead of the second leg next week.

Roma, Tottenham, Arsenal and Ajax all put one foot into the quarterfinals with comfortable wins. But the meeting of two former European heavyweights remains evenly poised.

United took the lead after 18-year-old substitute Amad Diallo scored his first European goal just five minutes after coming on. But the home team was disorganized for Rade Krunić’s late corner and goalkeeper Dean Henderson was unable to keep out Kjær’s thumping header.

“We should have attacked the ball with the men we had there,” United coach Ole Gunnar Solskjær said.

Milan had two early goals ruled out at Old Trafford. Rafael Leão was offside in the fifth minute, while Franck Kessié displayed brilliant technique to score in the 11th only to see the goal chalked off through VAR as the ball had struck his arm.

The visitors remained in control until United captain Harry Maguire somehow struck the post from point-blank range with the goal at his mercy after Bruno Fernandes headed on a corner in the 38th.

Fernandes was United’s key player, providing a lofted ball over the top for Amad to head in the opener in the 50th minute.

Harry Kane scored twice to put Tottenham in a commanding position with a 2-0 home win over Dinamo Zagreb.

The England striker converted a rebound after Erik Lamela’s effort hit the post in the 25th, and wrapped up the win in the 70th. Kévin Théophile­-Catherine failed to deal with Serge Aurier’s cross leaving Kane to score with a low finish.

Mohamed Elneny put Arsenal in touching distance of the quarterfinals by sealing a 3-1 win over Olympiakos in Greece.

Martin Ødegaard opened the scoring with a thunderous long-range strike in the 34th but the visitors missed further chances in the first half.

Youssef El-Arabi capitalized on poor pass from Arsenal ’keeper Bernd Leno to equalize in the 58th.

Gabriel restored the visitors’ lead in the 80th with a header, five minutes before Elneny made sure of the win when the home side failed to close him down and he let fly from outside the penalty area.

FANS IN THE STANDS

Gerard Moreno set up defender Pau Torres to score after the home team failed to clear a corner in the 30th minute, and was involved again for the second. Villarreal captain Raúl Albiol scored on the rebound in the 52nd after Georgiy Bushchan saved Gerard’s header.

Stephan El Shaarawy scored his first goal for Roma since returning to the club in January, helping the Italian team to a 3-0 win over visiting Shakhtar Donetsk.

Scottish champion Rangers drew 1-1 at Slavia Prague, and Ajax eased to a 3-0 win at home over Swiss team Young Boys.