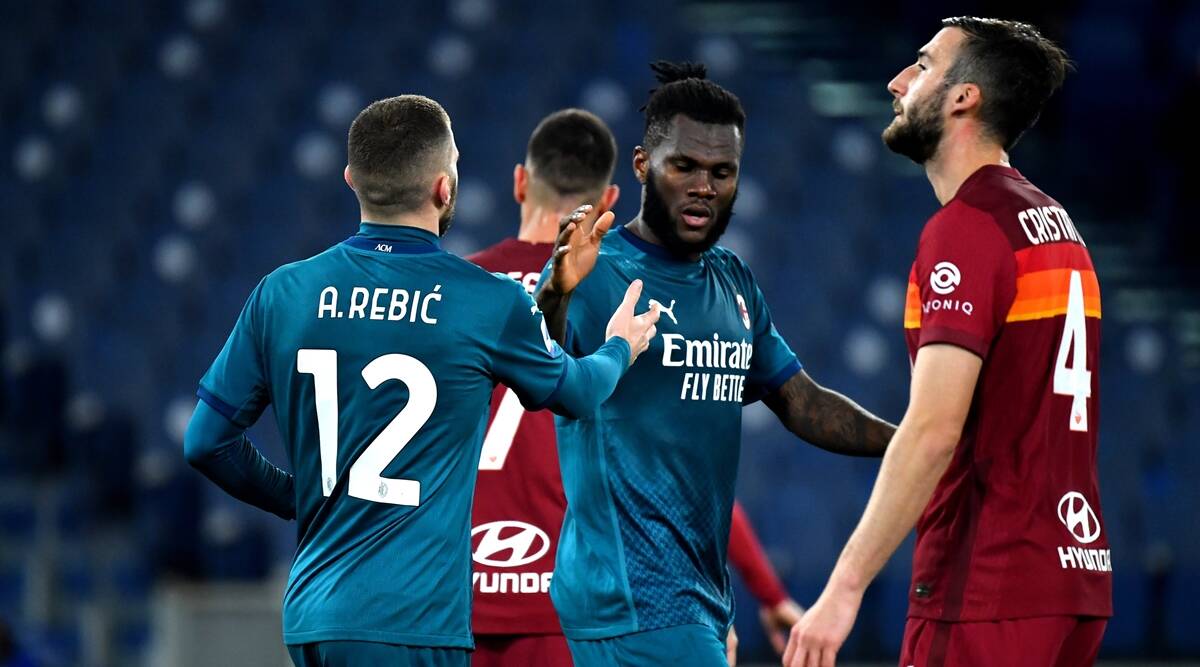 New Delhi: AC Milan returned to form with an enthralling 2-1 victory away to AS Roma on Sunday that restored a four-point gap to Serie A leaders Inter Milan.

The visitors hit the bar and had two goals disallowed before Franck Kessie scored from the penalty spot to give them a deserved halftime lead.

Roma, who also had a goal chalked off in the first half, quickly responded after the break when midfielder Jordan Veretout curled in his 10th league goal of the season.

But a superb turn and finish from Ante Rebic put the visitors back in front after 58 minutes and they held on despite late pressure from the hosts.

The victory ends a four-match winless run in all competitions for Stefano Pioli’s side, whose hopes of a first Serie A title in 10 years suffered a blow following back-to-back league defeats to Spezia and Inter.

“I told the team that two negative games can’t make us lose the confidence we built together for over a year,” Pioli told Sky Italia.

“We hoped to do better in recent weeks, but we’re happy to get this important victory.”

Milan remain second on 52 points, four behind Inter and six ahead of Juventus in third, while Roma remain fifth with 44 points.

The pressure was on the visitors to get a result after Inter’s 3-0 win over Genoa earlier on Sunday opened up a seven-point gap between the top two.

Milan came out firing as Fikayo Tomori’s finish after three minutes was ruled out for offside and Zlatan Ibrahimovic back-heeled a shot wide of an open goal.

Rebic unselfishly opted to pass to Ibrahimovic when through on goal, but the Swede was offside as he slotted into an empty net and the goal was chalked off.

Milan defender Simon Kjaer crashed a header off the bar, before Henrikh Mkhitaryan’s headed equaliser was ruled out because of a Gianluca Mancini foul in the build-up.

Referee Marco Guida awarded Milan a penalty following a VAR review after Federico Fazio trod on Davide Calabria’s foot on the edge of the box, and Kessie stepped up to dispatch the spot kick.

Veretout curled a superb finish into the far top corner five minutes into the second half, but Milan soon responded as Rebic left Mancini for dead with a neat turn before drilling home a low shot.

The visitors had no luck with injuries as Hakan Calhanoglu, Rebic and Ibrahimovic were all forced off with muscular issues.

Chances fell at both ends during a frantic end to the game and Roma were furious not to be awarded a penalty when Theo Hernandez got in a tangle with Mkhitaryan in the box, but Guida gave a foul against the Armenian.