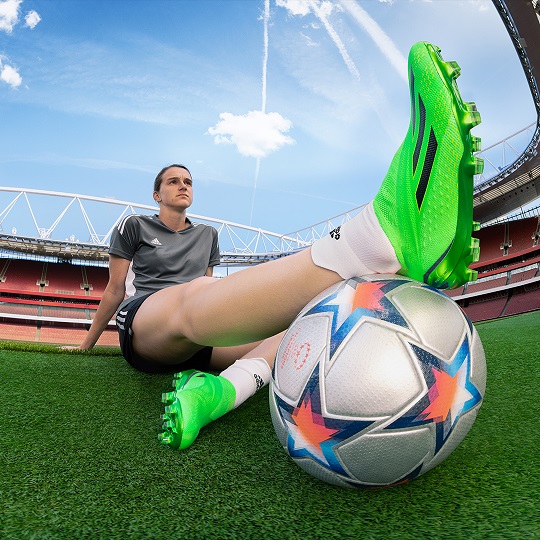 New Delhi: With the help of the universe’s most brilliant scientist, Rick Sanchez, and his grandson, Morty Smith, adidas unlocks new dimensions of speed for the players of Earth with the introduction of X SPEEDPORTAL – the latest innovation from its X speed boot franchise.

Having travelled the universe together in search of adventure, Rick and Morty bring their discovery to our reality in a new original animation as they experiment with the possibilities of multidimensional speed with X SPEEDPORTAL with some expert assistance from Mo Salah and Vivianne Miedema.

Every detail of X SPEEDPORTAL has been designed for the fastest players whilst remaining supremely comfortable, helping them unlock speed in all dimensions.

“If one thing’s for certain in modern football, it’s that the game is getting faster and faster. Faster attacks, faster reactions, and faster athletes. But ‘speed’ itself is also changing with the times. Top speed linear sprints used to dominate the game. In 2022, speed is multi-dimensional, encompassing mental quickness, positioning, space creation, and more,” said Franziska Aurnhammer, Senior Product Manager at adidas.

First introduced in 2020 on adidas’s game-changing X GHOSTED boot, adidas’s innovative SPEEDFRAME technology has been updated with a lightweight sole plate designed for unreal acceleration. The all-new multidimensional stud design gives players grip to get moving in any direction.

With so much speed, players need a boot that’s also stable, supportive, and keeps the foot locked in place. For this, adidas has created a new high-speed stability system which provides support, fit, and lockdown. The boot features a stability wing and support cage which keeps players feet locked in so they can play with absolute freedom when moving fast and changing direction.

Finally, the top-spec (P+) boot’s outer SPEEDSKIN 2.0 is a laceless lightweight upper for step in comfort and more direct ball contact. Designed to provide comfort for the full 90, the new SPEEDSKIN 2.0 will be available in laceless (P+) and laced (P1) models, creating a seamless connection between boot and foot.

Franziska Aurnhammer, Senior Product Manager at adidas added:“With X SPEEDPORTAL we listened to what some of the fastest players on the planet wanted from their boots. It was clear that the mental element of speed was just as important as the physical, which is why it

was so important to create a boot that not only supports explosive movement, but also allows players to enter a flow state where movement is fast and autonomous. The result is a boot that unlocks multidimensional speed for the fastest players on the planet.”

The boot’s launch campaign includes a 90 second original film from the creators of the Rick and Morty, featuring the latest escapade from Earth’s favourite dimension-surfing duo and a selection of iconic players.

In the film, the animated world meets the real world as Rick and Morty experiment with the possibilities of multi-dimensional speed using X SPEEDPORTAL, with a little help from Mo Salah and Vivianne Miedema. The full campaign video can be watched via the Adult Swim YouTube channel here.

“This 90 second short is as funny as anything Rick and Morty and as fast as whatever Rick must have put into this boot,” said Michael Ouweleen, president of Adult Swim.“It’s a collaboration that could only happen in a multiverse, and Rick, Morty, Mo Salah and Vivianne Miedema are the (fever) dream team you never knew you needed to see.”

As part of adidas’ journey to help end plastic waste, X SPEEDPORTAL is the first X-series boot to contain zero virgin polyester. Furthermore, at least 50% of the boot’s upper is made with recycled materials, with no compromise to performance.

The boot comes in a Portal Fluid Green colourway and will be available from Rs. 3999 to 24999 via adidas.co.in, and selected adidas stores and retailers.