Discovery Plus streaming app to beam MotoGP in India 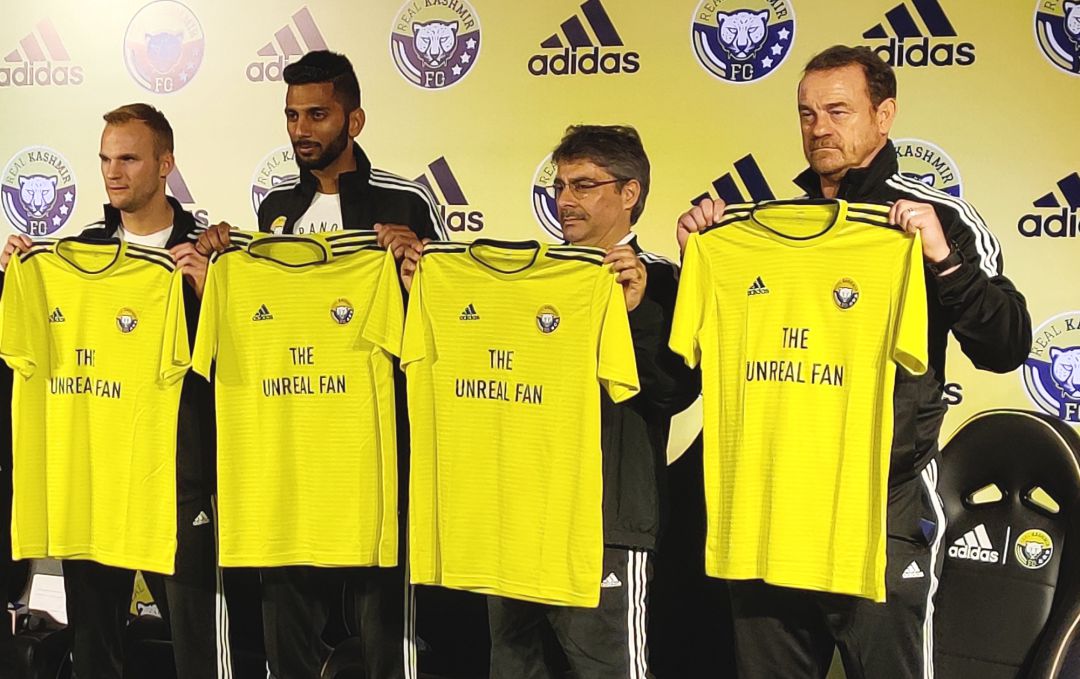 Diginitariea at the launch of the jersey

New Delhi: Global Sportswear giant Adidas and Jammu & Kashmir based football club Real Kashmir FC together unveiled the club’s 2019-2020 home jersey dedicating it to fans of the club. The club, which played in the I-League for the very first time last season, attracted massive crowds in both home and away games across the country, becoming one of the most loved clubs across India.

Adidas announced its partnership with Real Kashmir FC last season with an aim to bring about a positive change narrating an inspiring story of the ‘Snow Leopards’, as the club is popularly known. The story has redefined the ‘Real’ Kashmir, with football at the catalyst for change. The result has been unexpected, the team scaled unprecedented heights finishing third in their first appearance in the I-League despite playing in extreme temperatures and having faced numerous challenges, semi-finalists in this year’s Durand Cup and now a serious title contender.

Unveiling the new season jersey, Adidas has dedicated this season to the “UNREAL FANS OF REAL KASHMIR” as the club gave rise to a new phenomenon in the Indian footballing history. The 2018-19 I-League season saw a unique trend take place where fans of opponent clubs started cheering for Real Kashmir FC.

It became the second favourite club of opponent fans on social media. Fans from across India joined in conversation to shut the cynics and lead the voice of positivity. And as the Real Kashmir FC team travelled across the country, often, the club received standing ovations at away games from opponent fans, who did not switch loyalties but rather supported both clubs – a trend not seen before in football fanfare.

Manish Sapra, Senior Marketing Director, adidas India, “Our partnership with Real Kashmir is an essential part of the brand living it’s Core Belief that Through Sport, We Have the Power to Change Lives. With this launch of the new home jersey, we are celebrating this belief with fans who have shown their love and support for the club. This jersey is made for all those Unreal Fans who not only watch football but believe in the higher purpose of sport.”

The new season jersey has been carefully crafted, “Create. Believe. Inspire” written on the neck at the back, inspiring every individual to make a difference in their game, life and world. This season the yellow home jersey is accessible to the fans, available only in limited quantities across select adidas stores and online on shop.adidas.com starting from 21st Nov 2019, is built with adidas Climalite fabric and has the iconic adidas 3-Stripes on the shoulder.

Present at the unveiling of the jersey, Sandeep Chattoo, Co-owner of Real Kashmir F.C, said – “adidas and the snow leopards share a belief that sport has the power to change lives. Among other things, this power has inspired the youth, and put football at the center of conversations on Kashmir. It has garnered us a mammoth fan base that we could not have imagined. We are thrilled as, with this support, we are sure that we can go on to win the League”.

The club was founded in 2016 by a Kashmiri Pundit and a Muslim to channelize the energies of Kashmir’s youth through football, signed with adidas last year and has seen great progress both on and off the pitch in a short span of time.

Despite recent challenges on-ground, the team has had an outstanding pre-season, beating some of the big names from I-League and ISL teams in friendly games, Real Kashmir F.C is looking to better their position this season and win this edition of the I-League.