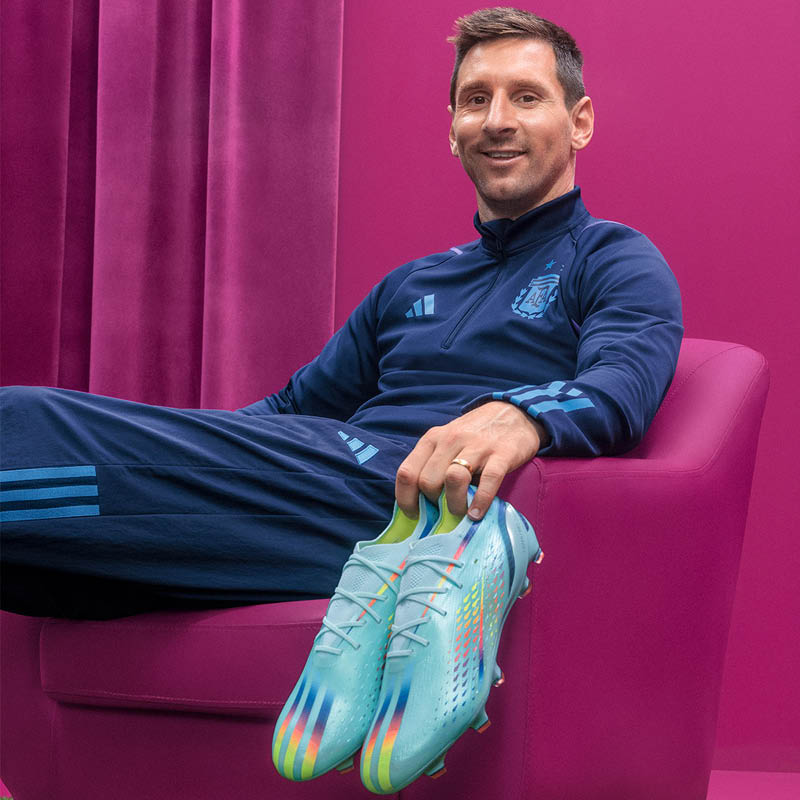 Featuring the latest innovations from each franchise, the three boots showcase a consistent design approach first seen as part of the Al Rihla Official Match Ball of the FIFA World Cup 2022™ group stages (revealed in March 2022),

Al Rihla translates as “the journey” in Arabic, representing the commitment and determination shown by each national team to reach the tournament. The colors and design of both the Al Rihla Official Match Ball and now the boots within the Al Rihla World Cup Pack reflect the speed of the modern game, and are inspired by the architecture, iconic boats, and the flag of Qatar.

The dynamic generative designs were created to support players who strive to be the best version of themselves, offering one starting line by uniting the nations, teams, players and fans who each create impossible moments in the game.

“For this special tournament and the biggest stage in sport, we wanted to capture the essence of speed and movement in reflection of the pace at which the modern game is played. With players showcasing what some see as impossible movement, we imagined the future of fast with the Al Rihla World Cup boot pack, bringing it to life with the same vibrant iridescence as the Al Rihla Official Match Ball to encapsulate the magic on the pitch at the FIFA World Cup 2022™ and beyond”, said Franziska Loeffelmann, Design Director – Football Graphics & Hardwear, adidas.

Every detail of X Speedportal – the latest innovation from adidas’s X speed boot franchise – has been designed for the fastest players whilst remaining supremely comfortable, helping them unlock speed in

all dimensions. adidas’s updated SPEEDFRAME technology, stability system, and SPEEDSKIN 2.0 designed for unreal acceleration and the grip to get moving in any direction.

Predator Edge introduces for the first time ZONE SKIN – a breakthrough innovation supporting swerve, spin and grip, whilst its new FACET FRAME on the sole of the boot delivers stability and dynamic traction to support powerful movement on the pitch. The frame also features a weighted forefoot piece that redistributes weight toward the front of the boot, optimizing power transfer when striking the ball.

Designed from the inside out using anatomical insights on the human foot, COPA SENSE features adidas design innovations, SENSEPODS, TOUCHPODS and SOFTSTUDS to deliver an enhanced feel and optimum touch for the wearer.

The adidas Al Rihla World Cup Pack will drop on October 11 and will be available via adidas.com/football-shoes and adidas retail stores.

Prices vary for each model and will be available on adidas.com