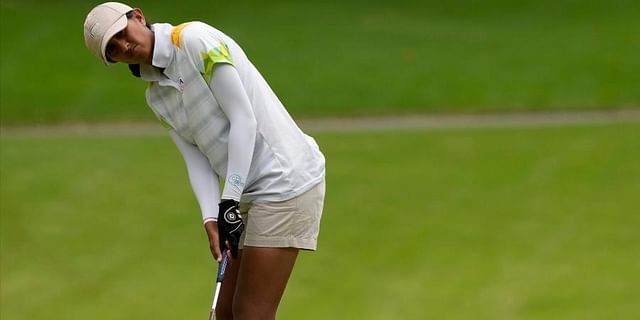 Boca Rio: Indian golfer Aditi Ashok got off to a flying start at the Gainbridge LPGA with a superb 6-under 66 to be Tied-third and three short of leader Lydia Ko (63) here.

Aditi, who missed the cut last time she played here at this course, was in sparkling form, finding the first 17 green in regulation.

She faltered only once on the 18th and it ended in a bogey.

Another Indian, the LPGA debutant Nishtha Madan, who is playing on an invite, had a struggle with 5-over 77 that began with a birdie but then had five bogeys and a double against one more birdie on 12th.

Aditi carried a Callaway 5-Hybrid as she handled the longer holes very well on a track which is very long.

The hybrid clearly worked for her and gave her more chances, prompting her to remark that she wished had taken a hybrid earlier in her career.

“Last time [here at Boca Rio] I missed the cut, but I remember it being really long. This time I was kind of focused on playing the long holes good and worked on my hybrids a lot the last three, four days,” Aditi said.

“That helped because I know I’m going to get at least five or six hybrids, maybe more, into greens. Being able to hit those close and make birdies with hybrids was good for me.

“I actually made, I think, three or four birdies today with a 5-hybrid [approach], which is great for me. Wish I would’ve added it sooner in my career, but better late than never,” Aditi added.

That gave her a two-shot lead over Danielle Kang.

Kang, winner of the Hilton Grand Vacations Tournament of Champions last week, had eight birdies against one bogey in her 7-under 65.

Seven players are tied for fourth with 67s and the group included the 2021 U.S. Women’s Open champ Yuka Saso.

Rolex Rankings No.1 and defending champion Nelly Korda was among those who shot 4-under to be T-11.

The Gainbridge LPGA was hosted by Lake Nona Golf and Country Club in Orlando last year and returned to Boca Rio Golf Club this year.