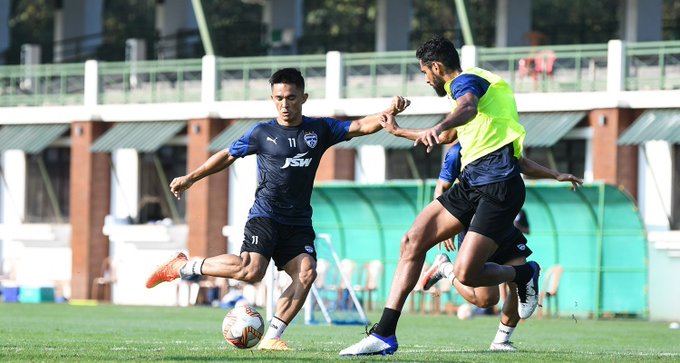 Panaji (Goa): Bengaluru FC will have to shrug off the disappointment of finishing seventh in the Indian Super League (ISL) 2020/21 season when they take on a committed Nepal club, Tribhuvan Army FC, in the AFC Cup Preliminary Round 2 match in Bambolim, Goa on Wednesday.

Tribhuvan Army FC are coming into the tournament on a high after beating Sri Lanka Police SC 5-1 in their Round 1 clash last week to set up a date with the Sunil Chhetri-led side, who had emerged champions in the 2018/19 ISL.

The 2020/21 ISL season was harsh on Bengaluru as it was the first time the team was unable to qualify for the semi-finals since joining the league in 2017/18. One of the reasons for their unimpressive show was the uncertainty over their coach.

After Spanish coach Carles Cuadrat departed in January, Bengaluru FC relied on their interim head coach, Naushad Moosa, during the business end of their campaign, even though Marco Pezzaiuoli had been finalised as the new head coach in February.

The tie against Tribhuvan Army FC on Wednesday will be the first time the 52-year-old German coach will oversee the Bengaluru FC proceedings.

Bengaluru FC last played against Jamshedpur FC, losing 2-3. Their ISL season was forgettable, as the Blues won just five games, lost eight and drew seven in 20 outings. They conceded 28 goals — their worst performance so far in a single season — which was two more than what they scored.

Bengaluru FC have made several changes to the squad from the previous season, bringing in Gabonese defender Yrondu Musavu-King and relieving Fran Gonzalez of his duties.

Musavu-King will join Juanan, Cleiton Silva and Erik Paartalu as the fourth foreign recruit. The 29-member squad also has five players from the club’s reserve side as they eye the future.

In addition to these youngsters, the side also features regulars such as Ashique Kuruniyan, Rahul Bheke, Suresh Wangjam, Harmanjot Khabra and Udanta Singh, among others.

The two teams will fight for a place in the playoff tie, which will be played against the winner of the game between Bangladesh’s Abahani Dhaka and Maldives’ Club Eagles.