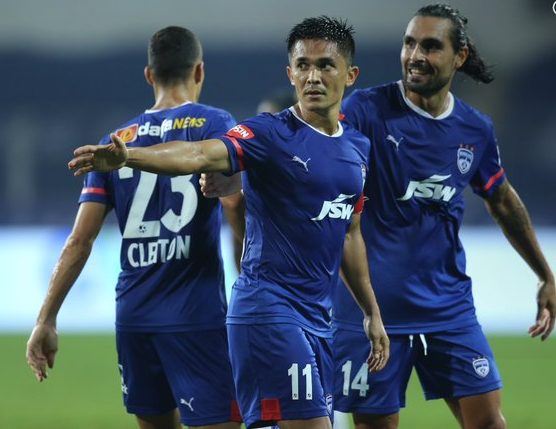 Margao: Sunil Chhetri and his boys will look to forget the disappointments of the last season and make a fresh start when the Indian Super League (ISL) club Bengaluru FC takes on Nepalese side Tribhuvan Army FC in the AFC Cup Preliminary Round 2 clash in Bambolim, Goa on Wednesday.

Bengaluru FC, who won the ISL in 2018-19, finished seventh in the previous season — their worst showing since becoming a part of the ISL in 2017-18.

Under new German coach Marco Pezzaiuoli, the side would want to script a new chapter in the prestigious continental competition.

On his team’s chances, Bengaluru FC skipper Chhetri said that despite being very ambitious and positive about the upcoming outings, the team would take “one game at a time and not take the opposition lightly”.

“We are taking it one game at a time. Generally, when I say this, we are the dominant side and it is meant to make us stay humble. But this time, I’m saying it and I mean it. We watched Tribhuvan in their last game, and they play quite well. You could see their unity in training. They must have stayed together for a long time,” Chhetri, who is now fully recovered from a bout of Covid-19, said on Monday.

The striker, who missed India’s two international friendlies, against Oman and UAE late last month due to Covid-19, added, “We are not thinking about the group stages or who we are going to play next. It’s about one game. And right now, it’s more about what the coach wants from us than about what the other team is doing.”

Regarding the preparations against the Nepalese side, which is made up of only domestic players, the India team striker said, “Ideally, we would have liked more time. We had to stop training after ISL 2020-21 and start again. Then stop and travel to Goa and quarantine and train again. But it’s exciting to have the fresh ideas the coach (Marco Pezzaiuoli) has brought in.”

Chhetri, who emerged as the highest-scoring Indian in the recently concluded ISL season with eight goals, said the side could benefit immensely from the ideas of the German coach.

“It is a very positive change at the club. The youngsters are enjoying it. You can see all the nervousness and the jitters go and a stable confident outlook coming about. A new manager has no prejudice. There is no previous baggage of what one can do and one cannot.”