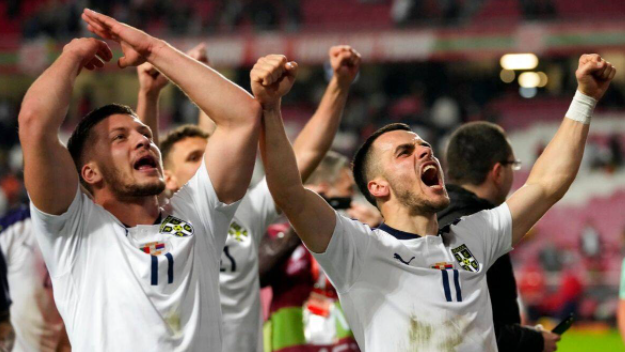 New Delhi: After Serbia clinched an automatic berth to the Qatar World Cup in a comeback 2-1 win over Portugal in their Group A qualifier on Sunday, their players have reportedly donated their €1million cash bonus to treatment of sick children in their country, according to The Bridge.

According to Marca, Serbia President Aleksandar Vucic offered the national team players a one million euro bonus before their game against Portugal in the event they managed to secure direct qualification to the 2022 World Cup.

As reported by Oma Sports, as soon as the national team returned home, the sum was immediately transferred to the account of the Football Union of Serbia (FSS). However, the players decided to donate money “to those who need them more – sick children for their treatment.”

Despite Renato Sanches opening the scoring early for Portugal in the game, Serbia managed to come back and grab a 2-1 victory away at the Estadio da Luz thanks to goals from Dusan Tadic and Aleksandar Mitrovic.

Portugal will now need to compete for a spot in the tournament through the playoffs that will take place in March.

Mitrovic said Serbia’s confidence ahead of the game was vindicated by a bold performance.

“We came here to play football and having been the better side, we earned it all,” he told Serbia’s Nova television.

“We are reaping the rewards of hard work and the belief that we would be able to defy the odds and beat Portugal. We are overjoyed, for our country and the people first and foremost.”

Messi in, Neymar out of Argentina vs Brazil in WC qualifying