The Indian team is going from strength to strength. Photos: @BCCI

Mumbai: Smart decision-making from the team management and all-round display from the players helped India come from behind to beat a formidable Australia 2- 1 in the ODI series.

India made the right call in asking KL Rahul to wicket-keep, allowing them to play an extra batsman, in the second and third ODIs, both of which they won.

On a batting strip at a small Wankhede Stadium, India paid the penalty of not playing an extra batsman. They were hammered by the Australian openers, David Warner and Steve Smith.

In Mumbai, Australia were in control from the very beginning. Things, however, changed in Rajkot. The pitch had no grass. Australia won the toss and put India into bat.

Australia had harped on dew being a key factor in deciding the outcome of matches. It was as if Australia had never played in dew-affected grounds. Dew plays a role in Australian grounds as well but they made an unnecessary issue of it here.

At Rajkot, the pitch was devoid of grass and hence slow, presenting Australia, up 1-0, a good chance to win the series. They won the toss, and instead of batting, preferred to field. 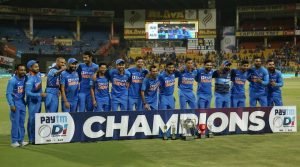 India ran away with the match, posting a huge score, thanks to Shikhar Dhawan, Virat Kohli and Rahul’s fluent half centuries.

Over to Bangalore, where the big M Chinaswamy Stadium wasn’t much affected by dew. Australia won the toss again, only this time they batted and had to counter a disciplined Indian bowling performance.

In Steve Smith, they have a world class batsman who is adept at batting in any condition and wriggle out of any situation. His game-reading sense is exceptional.

And together with Marnus Labushagne, a welcome entrant in Australia’s middle order, they form a formidable middle order. The pleasing thing about his batting is that he is a busy player. He doesn’t take much time to settle down once he gets in and keeps rotating the strike.

Aiding Smith and Labushagne’s batting talents is their swift running between the wickets that put the Indians under pressure.

When they got set and were scoring briskly, India skipper Virat Kohli didn’t deter from persisting with chinaman Kuldeep Yadav. He was aware Yadav could go for runs but banked on his wicket-taking ability.

NZ Tour: Samson for Dhawan in T20s, injured Ishant not in Test squad

Kohli knew if one of Smith or Labushagne got out, the Australian batting could lose their way, which is what exactly happened.

Ravindra Jadeja was a perfect foil to Yadav with his stump-to-stump line. Their disciplined efforts and Mohammed Shami’s incisiveness restricted Australia to 286/9, despite Steve Smith’s 131 runs.

Had they pushed on and scored in the region of 340-350, India would have found it very difficult to chase it down.

Dhawan must do a havan (sacrificial ladle) to get rid of his injury proneness. He keeps picking up odd injuries, a point India’s fielding coach has to look into.

Similarly, R Sridhar should also keep an eye on who are employed for outfield duties. Standing just inside the rope, out fielding requires sideways sprinting, diving, picking and throwing of the ball quickly.

All this aspects doesn’t fit someone like Rohit Sharma, who is over 30 now. The fielding coach and captain should chalk out whom to employ for in-field and outfield manning.

Rohit and Kohli batted sensibly. Had Rohit or Kohli got out, then India would have struggled to reach the 287-run target.

India should go back to slow, low turners to counter Australia in ODI series

The confidence-boosting win notwithstanding, the team management should discuss how to reduce the over-reliance on Rohit and Kohli.

When India won against Sri Lanka, many pointed out the weak nature of their opposition. Gladly, now no one can say that as Australia were at full strength and their top batsmen were among runs.

Under the stewardship of Ravi Shastri India have turned into a ruthless outfit now. The body language that the players exhibit suggests they hate to lose.

Winning is a habit and the team management should now focus on strengthening their mental fortitude to become serial winners.

The home season ended on a high with the ODI series win against the Aussies. Now over to New Zealand.

Most of the Indian players have experience of playing in NZ. As conditions won’t be new, one can expect a strong show there as well.

ODIs this year could be used for World T20 preparation: Shastri