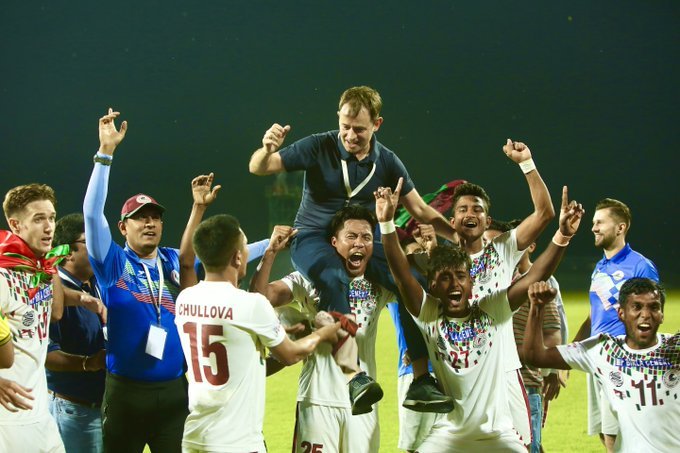 The AIFF’s league committee held a video conference on April 18 and recognised the Covid-19 global crisis as a “force majeure event of unique and unprecedented circumstances”.

The league committee recommended conclusion of the I-League with four rounds of matches yet to be played when the coronavirus-enforced lockdown brought the country’s football activities to halt in March.

As a result of the forced conclusion, there would be no relegation for the season.

The AIFF’s executive committee has accepted the league committee’s recommendations in its entirety.

“The Executive Committee agreed with the conclusions and the recommendations of the League Committee that this was a force majeure circumstance and the AIFF and all stakeholders must focus on a priority basis on safety and health aspects of players, officials and fans. In fact, there is still no certainty of when sporting activities including football can be resumed across the country,” an AIFF statement said.

Mohun Bagan had already accumulated an insurmountable 39 points from 16 matches. Second-placed East Bengal, third positioned Punjab FC (both 23 points) and Real Kashmir (22 points from 15 matches) were locked in a three-way battle for the runners-up spot.

East Bengal had written to the AIFF with the intention of halting the process to declare Mohun Bagan as champions and even wanted them to be declared runners-up with the hope of securing greater prize money.

The AIFF is now exploring the idea of organising a shorter duration tournament for the second division I-League teams next season for qualification for the 2020-21 I-League season.

The second division I-League was halted in its tracks midway due to the nationwide lockdown. The governing body is now seeking the help of the Asian Football Confederation (AFC) as to how to conduct the proposed qualifying tournament.

3. The remaining prize money in the Hero I-League 2019-20 (apart from the champion’s prize money) will be equally divided among the remaining 10 participating clubs.

4. However, there will be no relegation, and also no individual prize money for the Hero I-League 2019-20 season.

5. AIFF waits to discuss with the Asian Football Confederation to understand the feasibility of organising a shorter duration tournament next season with 2nd division clubs for qualification to the Hero I-League 2020-21.

7. There will be an extension of the deadline for submission of the requisite documentation for the AIFF Academy Accreditation process after the ongoing lockdown is revoked.