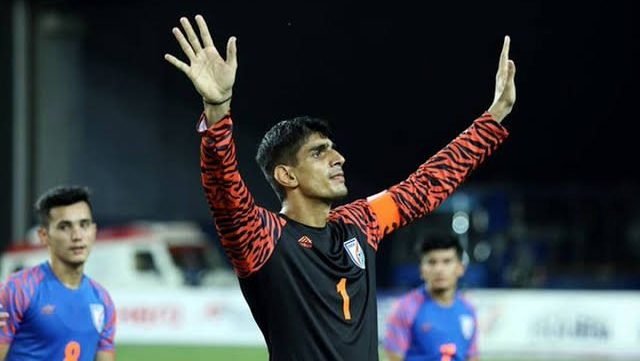 Goalkeeper Sandhu was named the year 2019-20’s beat footballer while midfielder Anirudh Thapa has been chosen as the emerging player, the All India Football Federation (AIFF) said.

Last year’s Arjuna Award recipient Sandhu received this recognition for first time in his career and became only the second goalkeeper after Subrata Paul (2009) to receive this award.

The winners were determined on the basis of votes from Indian Super League (ISL) and I-League club coaches.

“There was always a desire to reach this point and this is an award which I have always looked up to. Chhetri-bhai (Sunil Chhetri) has won it so many times and I have always thought when I can be worthy enough to win it,” the 28-year-old said.

“Garnering the all-important draw against Asian Champions Qatar in Doha, eleven clean sheets in last Indian Super League edition, winning the Golden Glove award could not have been possible without the team.”

“A big thank you to all Indian Super League and I-League club coaches who have thought I’m worthy of receiving this award. I’ll try my best to live up to the expectations,” he expressed.

In women’s football, midfielder Sanju was chosen as the best footballer while Ratanbala Devi was picked as the emerging player as per national team coach Maymol Rocky’s judgement.

Governing body of the game in West Bengal the Indian Football Association (IFA) was given the award for best grassroots development programme.