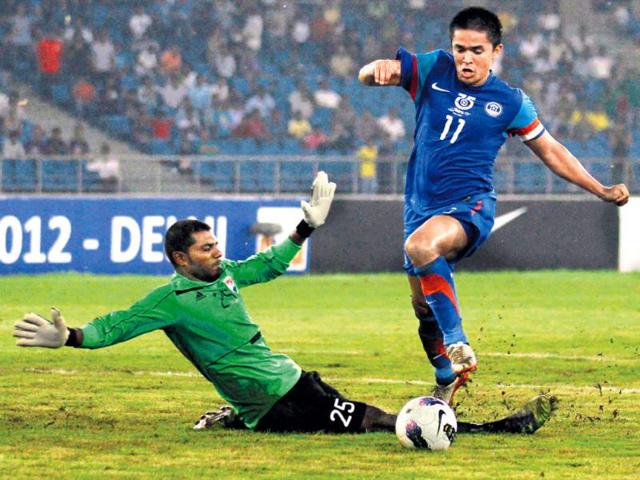 New Delhi: The All India Football Federation is planning to hold a camp for the senior national team in Bhubaneswar in early September ahead of the 2022 World Cup qualifying round match against Qatar in October.

AIFF General Secretary Kushal Das said a response from the Odisha government is expected soon on the holding of the national camp. If it happens, the players will get a month before the match against Asian champions Qatar to be held on October 8.

“With regards to the senior men’s team, our plan is to start the camp sometimes in early September. We want the camp in Bhubaneswar as the match against Qatar was scheduled there,” Das said.

“We’re in touch with the state government of Odisha as well as SAI. We are expecting to get a response from them. It’s a very tricky situation but we need to come up with the best possible solution given the circumstances,” he was quoted as saying by AIFF TV in a chat.

India are already out of contention for a berth in the 2022 World Cup but they are in the reckoning for a place in the 2023 AFC Asian Cup as it is a joint qualification campaign.

After taking on Qatar, India play Bangladesh (away match) on November 12 and against Afghanistan in Kolkata on November 17.

Das admitted that the planning process for camps of age-group teams has been thrown into disarray due to the COVID-19 pandemic. But he said the AIFF will have to find a way to start camps for the Under-16 men’s and U-17 women’s teams soon.

“The first important camp is for U-16 boys who are around three months away from the AFC U-16 Championship (starting November 25),” Das said.

“We are also conscious of the fact that the U-17 girls also need to start the camp as soon as possible.”

India is hosting the U-17 FIFA Women’s World Cup from February 17 to March 7 next year.

He said the AIFF was in talks with different state governments and the Sports Authority of India to host national team camps across age-groups.

“It’s extremely frustrating … all planning processes have been interrupted because of the virus. Under a normal situation, the junior teams would have been sent on a number of exposure tours to get them battle-ready for major tournaments like AFC U-16 Championship or FIFA U-17 Women’s World Cup.

“While efforts still continue, exposure tours may not be a feasible solution keeping the safety of the players and the staff in mind.”

He before the coronavirus outbreak, the AIFF had planned exposure tours for the U-16 men’s team which are shelved now.

“I’m hoping that we can arrange some tours, especially for the U-16 team, at least one tour before going to Bahrain. But, at this point of time it’s very difficult to predict. It’s definitely something to worry about.”

Regarding the India U-17 women’s team, Das said, “… maybe by November or December things will get better. We can manage a few tours. We just hope for that.”

Talking about the impact of COVID-19 pandemic on sports, he said, “For another year or maybe half-a-year, there will be limitations on the spectators inside the stadia. But hopefully in next two to three years, things will settle down and we’ll be back to some sort of normalcy.”