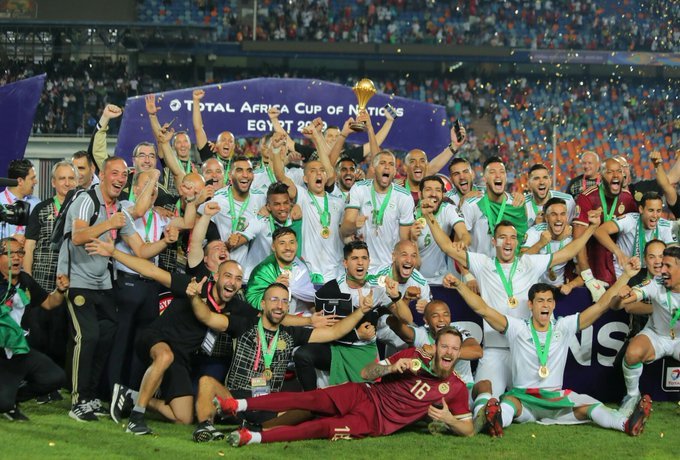 It was Algeria's second AFCON triumph.

Cairo: Algeria captured their second Africa Cup of Nations title with a 1-0 victory over Senegal in Friday night’s final, adding to the other championship they won in 1990.

The victory at Cairo International Stadium was Algeria’s second over the Lions of Teranga in this year’s edition of Africa’s biennial soccer championship, the other one coming in the team”s second match of the group stage, also by the score of 1-0.

Algeria opened the scoring in just the second minute of the match when striker Baghdad Bounedjah received a pass from midfield, dribbled to a spot just outside the penalty arc and launched a shot that ricocheted off defender Salif Sane, travelled far over the head of net minder Alfred Gomis and entered the right corner of the goal.

Senegal immediately stepped up their intensity in search of the equaliser, with Liverpool star Sadio Mane proving to be a constant threat despite being marked at all times by two defenders.

There will be one big party across all of 🇩🇿Algeria tonight!

Henri Saivet then put a scare into Algeria with a free kick in the 27th minute that goalie Rais M’Bolhi had difficulty corralling, while a left-footed shot 10 minutes later by Senegalese forward M’Baye Niang from inside the penalty arc nearly snuck into the corner of the goal.

Algeria continued to focus on protecting their lead after the break and managed to clear away any through passes into their penalty area, but it was evident that their players were starting to feel the effect of the high-intensity contest.

One of the key plays of the match occurred at the one-hour mark, when the referee initially awarded a penalty for an apparent hand ball by Algerian midfielder Adlene Guedioura but then reversed his decision after a VAR review.

The North Africans became even more defensive-minded down the stretch, while Senegal heaped the pressure on and were nearly rewarded twice over a five-minute span.

The first of those chances went to waste when Niang failed to convert after dribbling around M”Bolhi in minute 66, while on the second the Algerian keeper made an outstanding save to deny a potent shot by defender Youssouf Sabaly in the 70th minute.

Ismaila Sarr also had an opportunity to score just over five minutes before stoppage time, but his volley sailed over the crossbar.

Despite their valiant effort, time eventually ran out on Senegal’s dream of lifting their maiden Africa Cup of Nations title.

Nigeria took third place by defeating Tunisia 1-0 Wednesday night in the third-place playoff. Host Egypt, winner of a record seven Africa Cup of Nations titles, were eliminated in the round of 16 by South Africa.