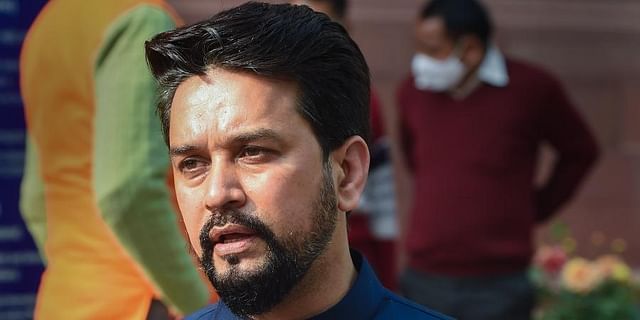 Union Sports Minister Anurag Thakur said on Thursday that the allegations levelled by wrestlers against the Wrestling Federation of India (WFI) and its chief are serious in nature and that he will meet the wrestlers once he returns to the national capital and listen to them.

Many wrestlers, including Vinesh Phogat and Sakshee Mallikkh, have levelled charges of sexual harassment of women wrestlers by the president and coaches of the Wrestling Federation of India (WFI) and of mismanagement in the functioning of the federation.

Thakur said he will meet the wrestlers and the required action will be taken.

“Government has worked for the welfare and upliftment of sports and players. India has won a lot of medals and delivered good performances at the global level. Work has been done to make federations better. Allegations levelled by wrestlers are serious in nature. Taking swift action, the Government of India sent a notice to WFI and sought a reply within 72 hours. Camp has been postponed. I will try to meet the wrestlers after I reach Delhi. We will talk and listen to them and take the required action,” Thakur to ANI.

Earlier in the day, champion wrestler and BJP leader Babita Phogat arrived at the protest site at Jantar Mantar in Delhi where wrestlers continued their sit-in protest for the second day demanding action against the Wrestling Federation of India (WFI) chief and other officials against alleged sexual exploitation of several athletes and “harassment of wrestlers by the WFI through its arbitrary rules and regulations”.

“I have assured them that the government is with them. I will try that their issues are resolved today,” Babita Phogat said after addressing the gathering.

Babita, who is a deputy director in the Haryana Sports and Youth Affairs Department, and a former wrestler had earlier tweeted, “I stand with all my fellow players in this matter of wrestling. I assure all of you that I will work to raise this issue with the government at every level, and the future will be decided the way players feel right.”

For the second day, Bajrang Punia, Sakshee Malikkh, and Vinesh Phogat, among others gathered at the Jantar Mantar in Delhi and were joined by other members of the fraternity.

Vinesh Phogat had previously alleged that coaches who are favourites of the WFI misbehave with women and harass them. She also accused the wrestling federation chief Brij Bhushan Sharan Singh of sexually harassing girls and calling her a ‘khota sikka’ after her defeat at the Tokyo Olympics 2020.

Vinesh, the first Indian woman wrestler to win gold in both Commonwealth and Asian Games, alleged, “Coaches are harassing women and some coaches, who are favourites of the Federation, misbehave with women coaches as well. They sexually harass girls. The WFI president has sexually harassed many girls.”

On Wednesday, taking cognizance of the protest staged by wrestlers, including Olympic and Commonwealth Games (CWG) medalists, the Sports Ministry has sought an explanation from WFI and directed it to furnish a reply within the next 72 hours on the allegations made.

The Ministry stated that if WFI fails to furnish the reply within the next 72 hours, the Ministry will proceed to initiate action against the federation in terms of the provisions of the National Sports Development Code, 2011.

Wrestling Federation of India (WFI) president Brij Bhushan Sharan Singh on Wednesday said that wrestlers, who made allegations of sexual harassment against coaches, should have approached the Federation with their names earlier.

The WFI president claimed that 97 per cent of wrestlers are with the BFI and those protesting were pressured into it.

He denied any incident of sexual harassment.

“There has been no incident of sexual harassment. If such a thing has happened, then I will hang myself,” said the WFI president during a press conference.

He also said that he is ready for an investigation.

“Sexual harassment is a big allegation. How can I take action when my own name has been dragged into this? I am ready for an investigation,” he added.