Hosur, Tamil Nadu: Amandeep Drall, who is still looking for her first win of the ongoing season, finished with a hat-trick of birdies to take a share of the lead in the opening round of the Rs.10 lakh seventh leg of the Hero Women’s Pro Golf Tour. Drall, who has a special relationship with the layout at the Clover Greens, won both the events staged at the venue last year.

Drall shared the lead with Gaurika Bishnoi and Gursimar Badwal, who have both won once each this season. The trio shot one-under 71 each to take a one stroke lead over Hero Order of Merit leader Neha Tripathi and Ananya Datar. Both Neha and Ananya carded even par 72 each.

In a field of 26 pros and three amateurs, the largest ever assembled at a domestic event on the Hero WPG Tour, four players including Riddhima Dilawari, the only multiple winner this year, Khushi Khanijau, Millie Saroha and Astha Madan shot one-over 73 each to be tied sixth. Tvesa Malik was sole 10th with a round of 74. 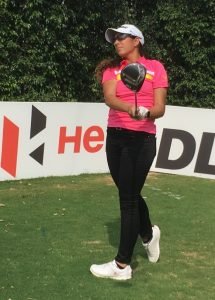 This was Amandeep’s sixth successive sub-par round at the Clover Greens. The last time she shot worse than sub-par was an even par 72 in the first round of the eighth leg of the 2018 Tour, which too she won. She added the 10th leg with three straight sub-par rounds.

Gursimar birdied the second, but bogeyed the Par-5 third and then parred the remaining holes except for the Par-4 13th, which she birdied for a round of 71. Gursimar won the second leg this year.

Gaurika Bishnoi, who won the fifth leg this season, opened with a birdie but dropped back-to-back bogeys on seventh and eight to turn in one-over 38. On the back nine, she birdied 12th and 14th to get to under-par and finish at 71.

Neha had just one birdie on seventh and she gave that back on 15th, while Ananya had three birdies and three bogeys.

Astha was two-under through 11 holes, before dropping thee shots in the last seven, while Riddhima birdied second and then dropped three bogeys in a span of four holes between eighth and 11th. She made up one with a birdie on Par-3 16th.

Yawn-fests: Five most one-sided matches in the World Cup