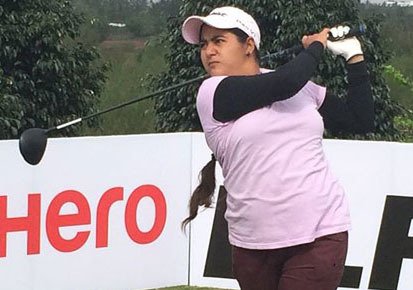 Greater Noida: Amandeep Drall carried on from where she left off in the fourth leg as she took a two-shot lead in the first round of the fifth leg of the Hero Women’s Pro Golf Tour here on Wednesday.

Amandeep, with six birdies against three bogeys, carded three under 69. Pranavi Urs (71) and Vani Kapoor (72) are second and third.

Amandeep was two shots clear of Pranavi Urs, who was the only other player to come back with an under par card. Pranavi had an eagle and four birdies against three bogeys and a double bogey.

At one stage she looked set for a very low score as she began with a flourish. Pranavi holed her second shot for an eagle on first and then added three more birdies on third, fifth and sixth to go to five-under.

Thereafter, the birdies seemed to dry up. She bogeyed seventh, double bogeyed the 10th and bogeyed 13th and 15th with just one birdie in between on the par-3 12th. She finished with 71.

Amandeep began with a birdie but gave the gains away on the next, only to birdie the third and once again get into red numbers. A birdie on sixth, followed by a bogey on seventh and another birdie on ninth meant she was two-under at the turn.

Vani Kapoor in the third group of the day took the early clubhouse lead with an even par 72, which was overtaken by Pranavi and then Amandeep, who was playing in the last group.

Vani displayed a lot of confidence with a steady round of even par 72, with two birdies and two bogeys.

Gaurika Bishnoi, Ridhima Dilawari and amateur Hunar Mittal were tied for fourth place with one-over 73 each.

Tiger to skip Bay Hill with stiff back as Masters looms