Are Indian pacers ready to roll on foreign pitches too? 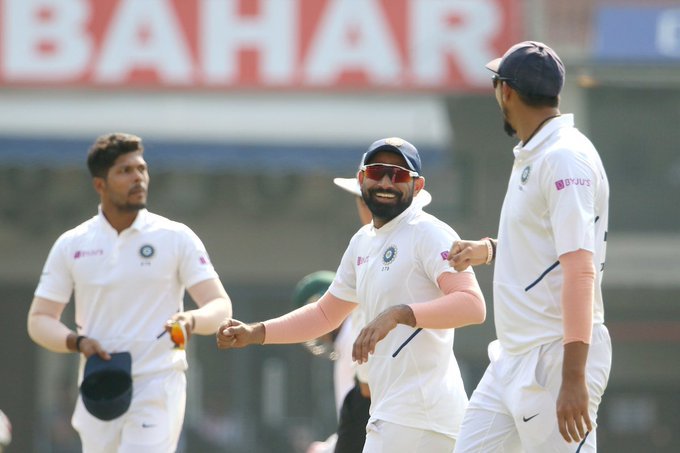 Mumbai: India beating Bangladesh in the first Test at Indore is not a big deal. In Test cricket Bangladesh is hardly a formidable opposition.

They hardly play any longer version tournaments locally but have always been a decent ODI team, created many an upset in World Cups, famously beating India in the 2007 edition.

Though a dangerous side but it would be mere wishful thinking to say that Bangladesh can upset India in Test cricket. Since achieving Test status and playing their first five-day match on November 2000, they have not been able to perform consistently at the topmost level.

To say that Indian bowlers are “best in the world” just because they annihilated Bangladesh isn’t an accurate statement to make. The real Test for the pacers would be in tours of New Zealand, Australia and England.

The consistency with which the Indian pacers are hitting the right line and length is appreciable though. They are more consistent from before.

Ahead of the pink ball Test, Ishant Sharma seeks advice from Mohammed Shami. Funny banter between the two 😀

The method of training and preparation which bowling coach Bharath Arun has employed is paying dividends. The bowling unit must be convinced that whatever Arun is preaching is beneficial to them so they are participating in it wholeheartedly.

Standing at 1.93m, it is imperative for Ishant to bowl the right length in order to get LBWs. The lanky bowlers that Ishant is, if he hits the flap of a batsman’s pad then the umpires tend to ignore his LBW appeals.

To hit the knee roll consistently, Ishant has to identify the right length to bowl and have his wrist positioned accordingly, since the wrist adds variations to deliveries.

Arun has separately worked on each pacer in the Indian squad and brought out the best of their natural qualities. His efforts have bore fruit, against an opposition that are rudderless without Shakib-al-Hasan.

India’s dominance at Indore was to such an extent that the absence of Jasprit Bumrah was never felt. For the past two years, Indian physios and trainers have struck up a coordianted work schedule with their NCA counterparts in assisting the Indian pacers. 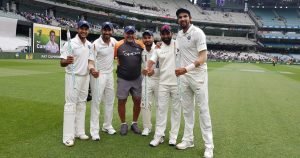 Bowling at full steam throughout the year is difficult for Indian quicks, particularly on hard surfaces and docile tracks. Wear and tear is more frequent now due to the high volume of matches cricketers play.

Modern science has helped them minimise the effect of injuries. Rotating the bowlers is key to keeping these bowlers fresh.

The best thing about Indian cricket of late is creation of a pool of pacers from which the team management is able to pick and choose players, just like the mighty West Indies did in the 1970s and 80s.

Grooming of bowlers is crucial, which is being done in a very professional manners in India now.

The return of Shaw

Prithvi Shaw is back and how. Helped by a poor Assam attack, who bowled more in their half than the batsman’s half, he smashed 63 runs off 39 balls in a Syed Mushtaq Ali trophy match at Wankhede Stadium.

Shaw and Aditya Tare took full advantage of a lax Assam bowling attack. But to go three months without any sort of practice, as he was suspended for a doping violation, and still time the ball so beautifully suggest genuine talent.

Assam never tested Shaw on the field, he might be short on match fitness, but he hit the ball from the middle of the bat, finding the gaps and directing the ball towards the very area he wanted it to go.

It was not blind hitting to milk runs of a weak attack, but a more technical knock, batting according to the conditions and quality of the bowling faced.

Primarily a backfoot player, his punch from the backfoot square of the wicket is a gift not many batsmen possess. His timing is impeccable and once he finds the gap, boundaries flow.

While his natural talent should be harnessed, the way he celebrated after reaching fifty is unadvisable. He was trolled on social media for gesticulating, ala Virat Kohli, that his bat would do the talking.

The video clip shows Shaw raising his bat and pointing to it, suggesting his willow would talk instead of him. 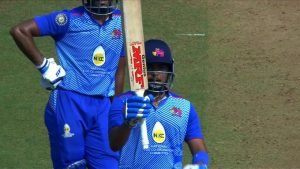 Prithvi Shaw made a strong statement on his return.

He should be well advised to control his emotions. Young as he is, Shaw should realise the cricket can often be a funny game, even surprisingly go. When the runs dry up, even the best of batsmen find it difficult to explain what is going on.

The trick is to approach batting in a similar fashion irrespective of the runs scored. Stiff competition for batting slots await him in the Indian team.

Opener Mayank Agarwal, fresh from a double century at Indore, wouldn’t have got entry into the team had Shaw not been caught up in doping rules. Now that Agarwal has scored two double hundreds in eight Tests, Shaw will have to play out of his skin to dislodge him at the top.

The competition is healthy and Shaw would have to be supremely fit, physically as well as mentally to be in the competition.

For the time being he has to wait till one of Rohit or Mayank fails. Rohit and Mayank have grabbed their opportunity with both hands.

Shaw will have put to put in a lot of effort in the coming months because he is now just another name in a long queue of aspirants. He must ensure that he doesn’t squander opportunities presented to him anymore.