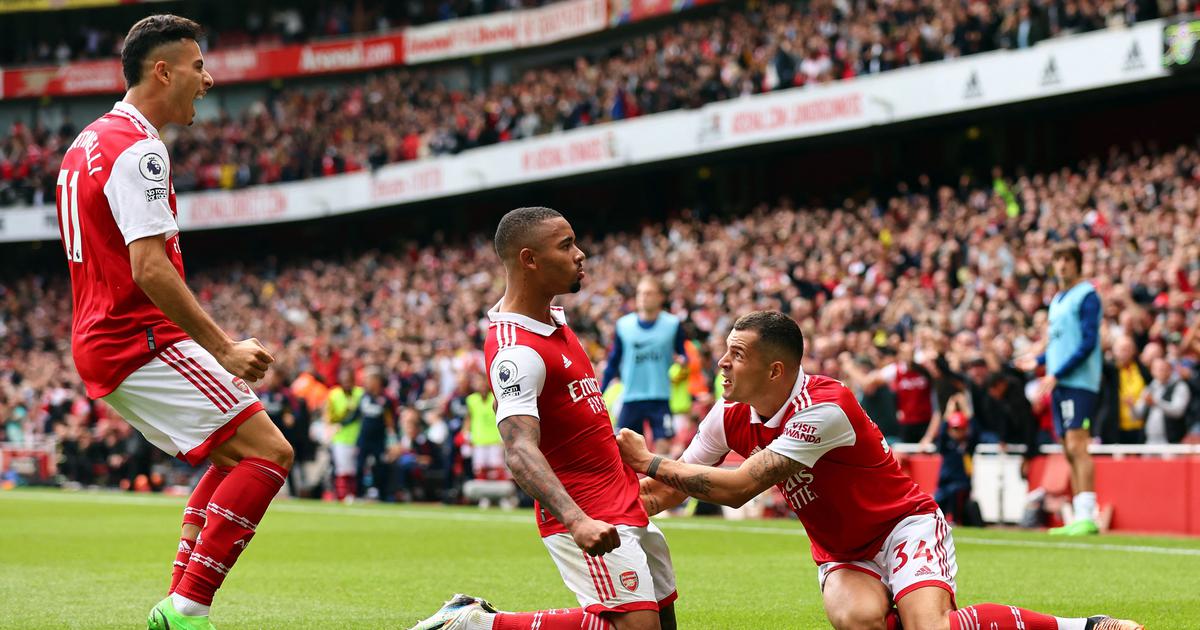 Arsenal underlined their credentials as genuine contenders for the Premier League title with an impressive 3-1 win over 10-man Tottenham in a bruising North London derby on Saturday.

Mikel Arteta’s side made it seven wins from eight league games this season as they moved four points clear at the top of the table.

The 192nd meeting between these bitter rivals from opposite ends of the Seven Sisters Road was a typically frenetic occasion from the moment Thomas Partey put Arsenal ahead early in the first half.

Tottenham defender Emerson Royal was sent off for an ugly foul on Gabriel Martinelli before Granit Xhaka’s goal ensured Arsenal would avenge the 3-0 defeat against their hated neighbours last season that cost them a Champions League place.

Ending Tottenham’s 13-match unbeaten run in the league was a significant statement of intent from Arsenal.

Arsenal have now lost just once in 30 home league games against Tottenham, yet there was far more than local bragging rights at stake for the Gunners.

Their only previous match against a top-four rival this season ended in a 3-1 defeat at Manchester United, but this dynamic performance showed they must be taken seriously in the title race.

Next Sunday’s showdown with Liverpool will be another test for Arsenal, but while champions Manchester City remain the title favourites, Arteta’s team are emerging as a force to be reckoned with.

Arsenal quickly seized the initiative, penning Tottenham back into their own penalty area before Martinelli met Bukayo Saka’s cross with a fierce strike that Lloris pushed onto the post.

Despite their vibrant opening, Arsenal were fortunate not to fall behind when Son Heung-min’s cross reached Richarlison, who should have done better than poke tamely wide from six yards.

But with Tottenham sitting too deep in a desperate bid to soak up Arsenal’s pressure, the Gunners took the lead in stunning style after 20 minutes.

A mesmerising 22-pass move ended with Ben White setting up Partey and the Ghana midfielder curled a sublime strike into the top corner from 25 yards.

Tottenham responded to Partey’s first goal since March with an equaliser 11 minutes later as Kane extended his north London derby record to 14 goals in 18 appearances.

William Saliba’s poor headed clearance was followed by Xhaka’s heavy touch inside his own area and Richarlison nipped in to steal possession, prompting a panicked rash tackle from Gabriel that sent the Brazilian sprawling.

Kane stepped up to drill the spot-kick straight down the middle, making him the first player to score 100 away goals in the Premier League.

Jesus almost restored Arsenal’s lead with a sublime run through the heart of the Tottenham defence before Lloris made a good stop from his close-range effort.

Lloris had saved Tottenham on that occasion but the France keeper was guilty of a costly mistake four minutes after half-time.

Saka cut inside the Tottenham area for a low strike that Lloris parried weakly in front of him.

When Cristian Romero was unable to clear, Lloris compounded his initial blunder as he let the ball roll through his hands and Jesus tapped in from virtually on the goal-line.

Jesus has been one of the catalysts for Arsenal’s impressive run this term, scoring five times since joining from Manchester City in the close-season.

Emerson shattered Tottenham’s comeback hopes when the right-back earned a straight red card for raking his studs down Martinelli’s ankle in the 62nd minute.

It took Arsenal just five minutes to make the most of their numerical superiority as a flowing move featuring Partey and Martinelli climaxed with Xhaka blasting a fine finish into the far corner from 18 yards.