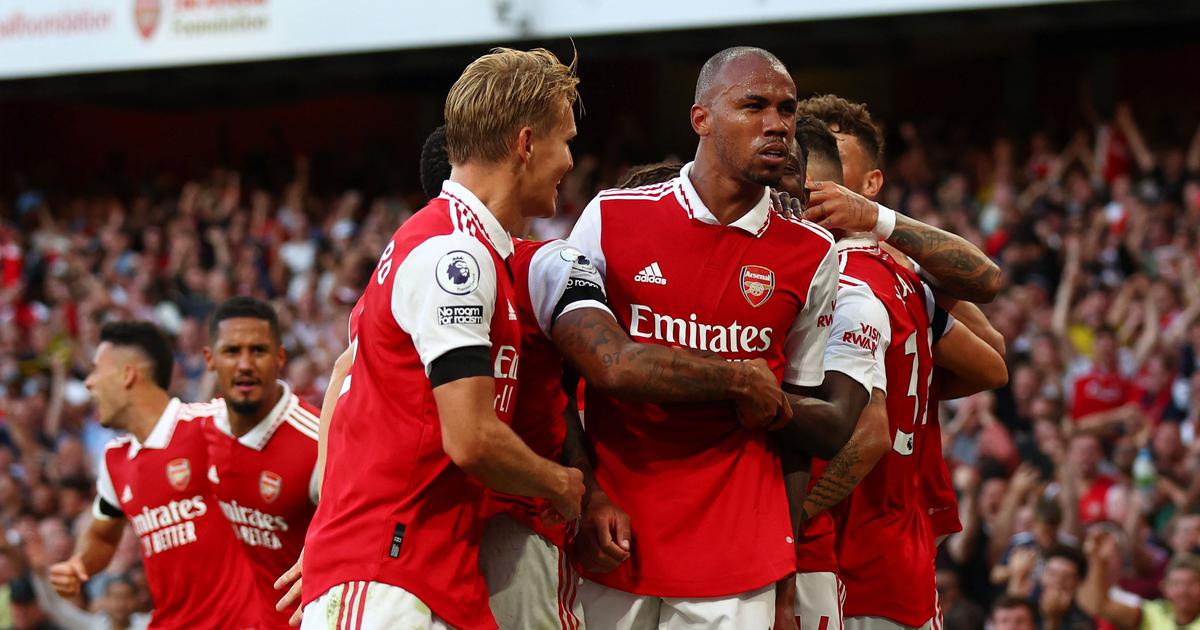 On a remarkable day in the top flight, leaders Arsenal maintained their perfect start with a dramatic 2-1 win against Fulham.

Liverpool stole the spotlight as they recovered from Monday’s lacklustre 2-1 loss at Manchester United in astonishing style.

After three games without a win, the Reds rebounded by equalling Manchester United’s 9-0 wins against Ipswich in 1995 and Southampton in 2021, as well as Leicester’s thrashing of Southampton in 2019.

Trent Alexander-Arnold rifled into the top corner from 25 yards in the 28th minute.

After providing three assists, Firmino scored himself with a close-range volley to put the result beyond doubt by the 31st minute.

Virgil van Dijk headed in Andrew Robertson’s corner on the stroke of half-time as Liverpool scored five in the first half of a Premier League game for the first time.

Chris Mepham’s own goal from Alexander-Arnold’s 46th minute cross was followed by Firmino grabbing the seventh in the 62nd minute.

Fabio Carvalho’s first goal since his summer move from Fulham made it eight in the 80th minute.

Diaz notched the historic ninth with five minutes left as Liverpool equalled their biggest top-flight margin of victory, set against Palace in 1989.

“We wanted to show a reaction. Getting to be the best version of ourselves. We scored wonderful goals,” Liverpool boss Jurgen Klopp said.

“The game settled and we kept scoring. It was the perfect afternoon.”

Champions Manchester City staged another impressive rally as they came from 2-0 down to beat Palace at the Etihad Stadium.

Palace went ahead in the fourth minute as Eberechi Eze’s free-kick deflected off John Stones into the net for an own goal.

City fell further behind in the 21st minute when Palace defender Joachim Andersen was left unmarked to head in Eze’s corner.

But City came from 3-1 down to draw at Newcastle last weekend and Bernardo Silva gave them hope with a 53rd-minute effort that deflected in off Jeffrey Schlupp.

City equalised in the 62nd minute when Phil Foden’s cross reached Haaland and the former Borussia Dortmund striker headed his first home goal since joining in the close season.

In the 70th minute, Haaland prodded home and the Norwegian sealed his hat-trick in the 81st minute.

“What Erling Haaland has done today he has done all his career. It is nothing special,” City manager Pep Guardiola said.

At the Emirates Stadium, Arsenal’s three-match winning run was threatened when Aleksandar Mitrovic robbed Gabriel and slotted home in the 56th minute.

But Martin Odegaard equalised eight minutes later with a deflected effort before Gabriel bundled over the line in the 86th minute after Fulham’s former Arsenal keeper Bernd Leno failed to hold onto the ball.

It is only the third time in the Premier League era that Arsenal have won their first four games.

“Winning like this is really nice. We made a mistake and they punished us but then how we reacted against adversity, the team believed,” Arsenal boss Mikel Arteta said.

Raheem Sterling scored his first goals for Chelsea in a dramatic win over Leicester.

Chelsea midfielder Conor Gallagher was sent off in the 28th minute for a foul on Harvey Barnes moments after being booked.

Sterling struck in the 47th minute, the former Manchester City forward’s shot deflecting off Daniel Amartey into the net.

Sterling doubled his tally in the 63rd minute as he tapped in from Reece James’ cross before Barnes squeezed in a low shot three minutes later.

Erik ten Hag said Manchester United have learned from their dismal start to the season after Bruno Fernandes’ 55th-minute volley saw off Southampton.

Ten Hag’s side sat bottom of the Premier League after losing their opening two games, but have now secured successive league victories for the first time since February.

“I think the players learnt some lessons from Brentford. We were more compact on the long balls. Of course we were really happy,” Ten Hag said.