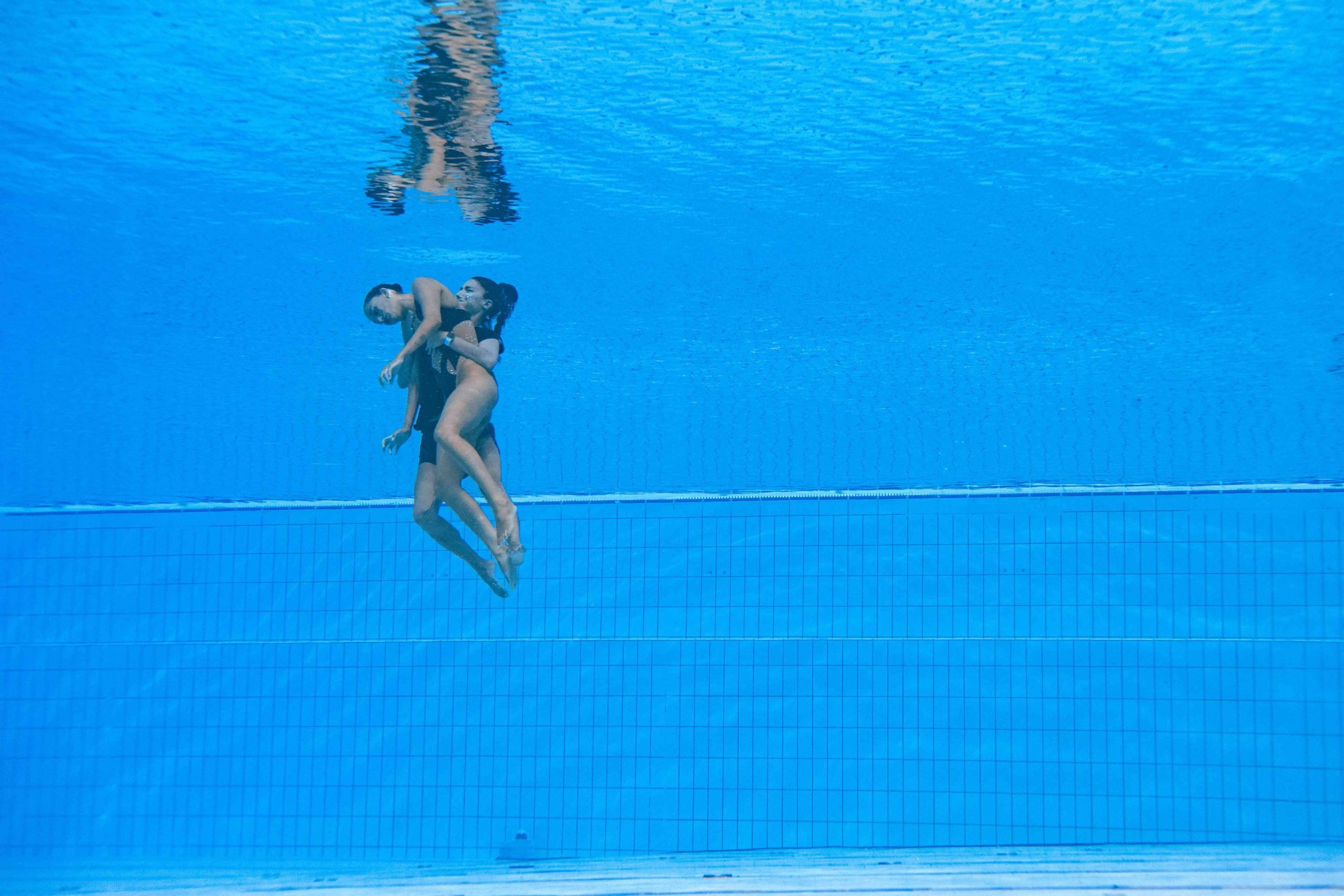 Budapest: Artistic swimmer Anita Alvarez was dramatically rescued from the bottom of the pool by Team USA’s head coach after fainting in a distressing scene at the World Aquatics Championships in Budapest.

Andrea Fuentes leapt in to rescue Alvarez, who had sunk to the bottom of the pool and was not breathing after passing out at the conclusion of her routine during Wednesday night’s solo free final.

“It was a big scare. I had to jump in because the lifeguards weren’t doing it,” Fuentes was reported as saying by Spanish newspaper Marca.

Fuentes, dressed not in swimming gear but in shorts and a T-shirt, dived to the bottom of the pool and dragged Alvarez to the surface before being assisted to get the stricken American to the edge of the pool.

The USA artistic team said in a statement that Alvarez fainted due to the effort expended during the routine. Peter Kohalmi / AFP

“I was scared because I saw she wasn’t breathing, but now she is doing very well,” said Fuentes, a four-time Olympic artistic swimming medallist.

Alvarez was taken on a stretcher to the pool’s medical centre, with teammates and fans appearing to be in shock poolside, with some in tears consoling each other.

“It was very intense,” Fuentes told AS newspaper. “I think she was at least two minutes without breathing because her lungs were full of water.

“But we were able to take her to a good place, she vomited the water, coughed and that was it, but it was a big scare.”

Fuentes was critical of the slow reaction of the lifeguards at the Aquatic World Championships, which finish on Sunday after 10 days of competition.

“When I saw her sinking, I looked at the rescuers, but I saw that they were stunned. They didn’t react,” Fuentes was reported as saying by the newspaper.

“I thought, ‘Will you jump in now?’ My reflexes kicked in quickly. I’m like that, I can’t just stare.

“I didn’t overthink it, I jumped. I think it was the craziest and fastest free dive I’ve ever done in my career.

“I picked her up and lifted her, obviously she was heavy, it wasn’t easy.”

The 25-year-old Alvarez was in her third World Championships but has passed out in competition before. She suffered a similar reaction during an Olympic qualifier in Barcelona last year.

The USA artistic team released a statement from Fuentes on social media, saying Alvarez had fainted due to the effort expended during the routine.

“Anita is okay – the doctors checked all vitals and everything is normal: heart rate, oxygen, sugar levels, blood pressure,” Fuentes said in the statement.

“We sometimes forget that this happens in other high-endurance sports. Marathon, cycling, cross country … we all have seen images, where some athletes don’t make it to the finish line and others, help them to get there,” she added.

“Our sport is no different than others, just in a pool, we push through limits and sometimes we find them. Anita feels good now and the doctors also say she is OK.

“Tomorrow she will rest all day and will decide with the doctor if she can swim free team finals or not. Thank you for all of your well wishes for Anita.”

Note: This report is auto-generated from AFP news service.