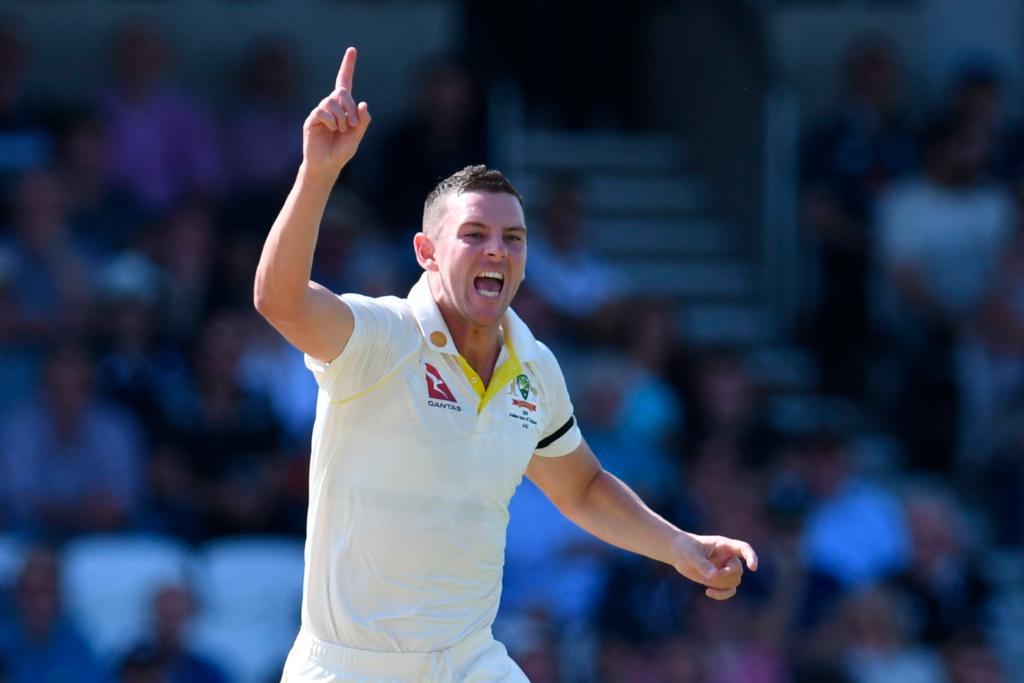 Josh Hazelwood exults after taking a wicket on Friday.

Leeds: Josh Hazlewood took five wickets and Marnus Labuschagne hit a defiant fifty as Australia first bundled England out for 67 in their first innings, their lowest Ashes score since 1948, and then put up 171/6 with a 283-run lead, at stumps on day 2 of the third Test here on Friday.

England missed a huge opportunity to capitalise after the Aussies were bowled out for 179 in their first innings with Jofra Archer bagging six wickets. But Hazlewood was in the mood from the word go on a sunny morning at Headingley, as he snatched five wickets for just 30 runs.

On a day 16 wickets fell, the Aussies too were reduced to 97/4 in their second dig before Labuschagne shared a 66-run stand with Mathew Wade (33).

Labuschagne ended the day batting on 53 from 139 deliveries, his innings laced with five fours. James Pattinson was with him on 2 at close of play.

For England, Ben Stokes (2/33) was the best bowler as he had Labuschagne out caught behind – but off a no ball and also saw two dropped catches off his own bowling of the same batsman.

Archer bowled just 8.4 overs before pulling a hamstring. He left the field but came back much to the relief of the home crowd.

Stuart Broad (2/34) also bowled well as none of the Aussies batsmen looked comfortable except Labuschagne.

Earlier, England were tottering at 54/6 at Lunch. Hazlewood and Cummins were the stars of the show in the morning session. Jason Roy (9) was the first batsman to go as he failed to reach double figures in what has been a pretty poor induction into Tests for the opener.

It was a typical fast bowler’s dismissal as the ball from Hazlewood pitched in line, moved just enough to take the edge of the drive and David Warner picked it up well at first slip.

Skipper Joe Root too failed to rise to the challenge as he was gone two balls later, once again caught by Warner in the slip cordon. Root’s bat was almost hanging out there to induce the edge and Warner picked a brilliant one. With the captain back in the hut, the score read 10/2.

But there was more trouble waiting as Cummins joined the party to send back opener Rory Burns (9) as his honeymoon too seems to be over at the top of the innings as he edged one down the leg side. Ben Stokes (8) too failed to rise to the challenge that awaited him as Pattinson came in and removed him with Warner picking another one in the slip cordon.

A wild drive with the score not looking too good is the last thing that the England team management would have wanted, but that was how it panned out as the Aussies clawed right back into the game on the second day.

Warner though wasn’t done as he picked another brilliant catch when Hazlewood had Jonny Bairstow (4) walk back to the pavilion.

It was almost a horizontal effort from the opener in the slip cordon. Having lost six wickets in the first session, England were up against it and collapsed soon after the break. Australia lost Warner for a duck, Broad trapping him in front.

Marcus Harris (19) and Usman Khawaja (23) could not convert their starts with Jack Leach and Chris Woakes accounting for their wickets respectively. Travis Head (25) was castled by Stokes and Wade was caught behind off the same bowler. Aussies skipper Tim Paine’s woeful form continued with the bat as he got out without scoring.