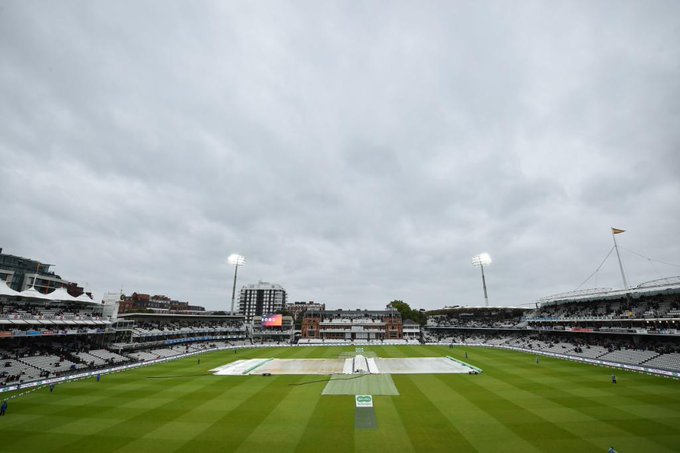 Play abandoned due to the weather, Australia will resume today on 80/4

New Delhi: Not a single ball could be bowled after lunch as England made the most of the seam-friendly conditions to dent Australia’s top-order and leave them stuttering at 80/4 before showers forced a break to be taken early on Day 3 of the rain-affected second Ashes Test at Lord’s on Friday.

It rained heavily post-lunch as played seemed unlikely as time progressed. It was called off after a final inspection at 5:20 p.m. local time with two days left for a result to the game.

The Aussies won the first rubber by a handsome margin. Steve Smith, whose twin tons helped the Aussies script the memorable 251-run victory in the first rubber at Edgbaston, remained at the crease on 13 off 40 balls (2×4) as other batsmen fell around him.

For England, pace spearhead Stuart Broad picked up two wickets with debutant Jofra Archer and in-form Chris Woakes scalping one each. England rode Rory Burns and Jonny Bairstow’s fifties on Day 2 to post 258 after the first day’s play was washed out.

Resuming from overnight score of 30/1, the tourists lost Cameron Bancroft (13) who was trapped in front by Archer. Bancroft reviewed the decision but replays showed the ball nipping back nicely off the seam and hitting the pads in line.

Archer celebrated his first Test wicket to rousing applause from the packed crowd as Smith walked in to bat.

Usman Khawaja looked good for his 36 from 56 deliveries, before Woakes found his outside edge with a good length delivery outside off stump. Khawaja pushed at the ball to give Bairstow a regulation catch behind the stumps.

Travis Head (7) could not dig in for long as he was out plumb in front to Broad who was first turned down by umpire Aleem Dar with a review showing the ball hitting the middle stump with no inside edge.

At 71/4, the Aussies were in all sorts of trouble but Smith looked in a league of his own, once again trying to save his side from a collapse. Matthew Wade joined him at the other end and defended 19 balls without scoring when lunch was taken as it started drizzling.

Lara, Sarwan to work with WI batsmen ahead of India Tests