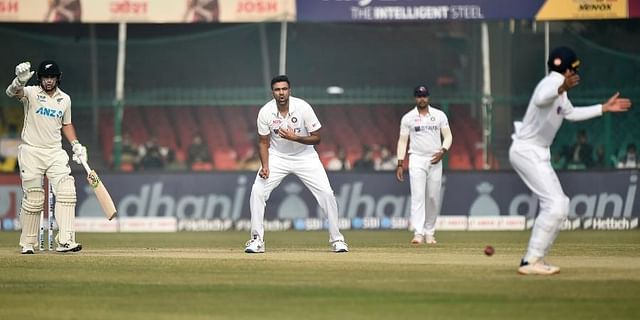 Kanpur: Seasoned off-spinner Ravichandran Ashwin on Monday went past Harbhajan Singh to become the third highest wicket-taker for India in Test cricket, reaching the mark in his 80th match.

The legendary Anil Kumble tops the chart with 619 scalps and is followed by India’s first World Cup-winning captain Kapil Dev, who has a total of 434 wickets under his name.

The 35-year-old Ashwin drew level with Harbhajan (417 in 103 games), who remains one of India’s finest spinners, when he took the wicket of New Zealand opener Will Young towards the end of the fourth day in the opening Test here.

The tweaker then dismissed Tom Latham to get his 418th Test wicket.

In New Zealand’s first innings, he had registered figures of 3/82 in 42.3 overs, helping the hosts gain a handy 49-run lead by bowling out the opposition for 296.

“I would like to congratulate Ashwin on his milestone. Well done and hope he wins many more matches for India,” Harbhajan told PTI.

“I never believed in comparisons. We played our best cricket in different times, against different opposition. I had done my best for the country back then and ditto for Ashwin, he did his best now,” the former India spinner added.

Ashwin is the fourth Indian bowler to take more than 400 wickets in Test cricket.

Ashwin made his Test debut in November 2011 against the West Indies in Delhi.

Apart from his exploits with the ball, Ashwin is also known for his capability with the bat, scoring 2685 runs at an average of 27.68 with five centuries to his name.

The man from Chennai has also taken 150 wickets in 111 ODIs and is the third highest wicket taker for India in T20Is with 61 scalps from 51 matches.