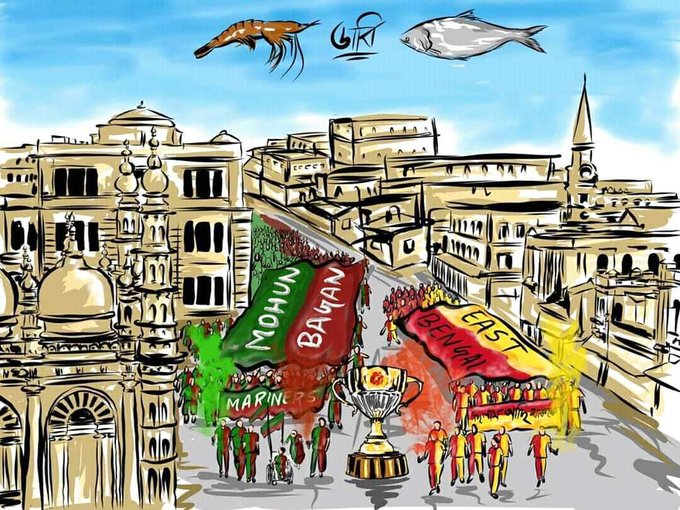 Kolkata: Cold statistics often confirm a trend but don’t necessarily point towards an inference. Particularly in case of any acrimonious football derby where several factors determine the contest’s eventual outcome.

Hence it is wise not to declare ATK Mohun Bagan outright ‘favourites’ to do a double over SC East Bengal in the Kolkata Derby on Friday solely on the strength of their ISL standings.

Table toppers ATKMB (36 points from 17 games) are certainly better placed than a gradually-improving SCEB (17 from 17) and undoubtedly are the favoured team on paper.

But the storied ‘Boro Match‘ (Big Match), in its 100th year, has witnessed countless triumph-against-all-odds stories where conventional wisdom went for a toss.

For SC East Bengal to win, only a fighting mentality won’t be enough, though they only have bragging rights to play for.

Meticulous planning and its accurate execution against a well-rehearsed team is what their suspended coach Robbie Fowler would demand from the stands, unable to inspire them from the dugout.

Complicating matters is the absence of his deputy Tony Grant, who like Fowler has also been hauled up for his foul mouth against referees.

Considering the defensive as well as goal scoring woes the Red and Golds have faced all season, how they tackle these key fumbling departments yet keep Roy Krishna-spurred Bagan at bay could determine which way the battle would tilt.

A draw would help neither but potentially damage the prospects of Asian Champions League (ACL) berth-chasing Bagan more as it would hand second-placed Mumbai City (34 points) a chance to catch-up with them on points.

Mohun Bagan coach Antonio Habas is well aware of these varied permutations and combinations. Being a two-time ISL winner, he has drilled his team exactly to his no-nonsense, happy to win ‘ugly’ rather than ‘entertain’ specifications.

There is no match bigger than this match. Don't miss the Kolkata Derby on 19th Feb 7 PM live on Jalsha Movies, Star Sports 3, Disney plus Hotstar VIP and Jio TV pic.twitter.com/Kjy9V5i3yF

His ‘balanced’ approach may not get the seal of approval from most Green and Maroon supporters but has been undeniably effective. And with four straight wins they seem to be peaking at the right time, unlike Mumbai.

Much of Habas’ offensive strategy has been Krishna oriented while his water-tight defence has been backed up reliably by Arindam Bhattacharjee in goal.

The Spaniard’s chosen first XI would provide a sneak peak into his thought process regarding the match though he is unlikely to deviate from his safety-first approach that has served him so well so far.

Despite both teams boasting of several Bengalis, it is the overseas stars who are likely to command most attention, Golden Boot race leader Krishna being on top of that list. His clinicalness in front of goal and ability to score from seemingly innocuous positions deserve praise.

Fowler would similarly pin hopes on his mid-season signing Bright Enobakhare. The Nigerian’s languid, elegant dribbling brightened up an otherwise grim debut Red and Gold ISL campaign though it hadn’t quite lifted them from the bottom half of the 11-team standings.

Stand-out performers both Krishna and Enobakhare may be but they would need support from their fellow attackers and midfielders.

Bagan have a spring in their step since the arrival of Brazilian Marcelinho and Goan Lenny Rodrigues in the January transfer window.

East Bengal have improved too since drafting in several out-of-favour Indian players from other ISL teams. But what they would dearly want is Anthony Pilkington and Jacques Maghoma to assist Enobakhare more consistently just like Marcelinho and Manvir Singh have done for their opponents.

Which set of players rise to the occasion and maintain a demanding intensity throughout 90 minutes would be crucial.

The Mariners have a habit of plucking late goals from nowhere after stretching the game till the end. Fowler’s side were stung by this tactic in a 2-0 defeat in the first leg in November.

Habas wouldn’t mind a similar seamless execution of the by-now familiar tactic. Circumstances though demand a more offensive outlook keeping in mind what’s at stake for the Green and Maroons.

Fowler would hope his much changed team, personnel wise, would not be tied down by the scar of the first leg defeat in an otherwise controversy-laden campaign.