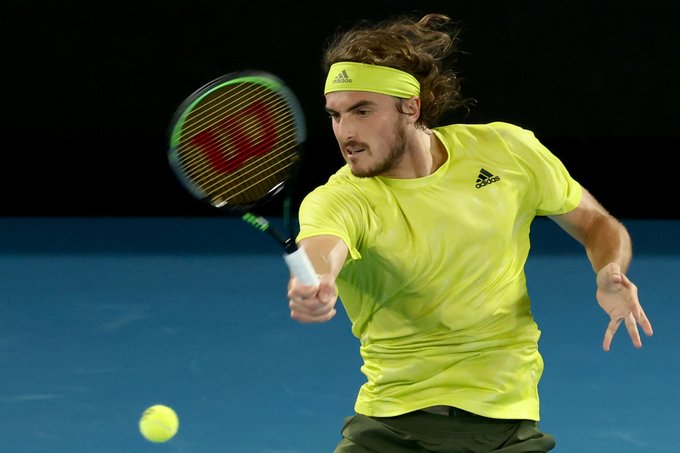 Melbourne: Stefanos Tsitsipas became only the second player to recover from two sets down to beat Rafael Nadal at a Grand Slam on Wednesday, as he recorded a 3-6, 2-6, 7-6(4), 6-4, 7-5 victory at the Australian Open.

The Greek was handed a route back into the match as Nadal committed three uncharacteristic errors at the start of the third-set tie-break, and he took full advantage of his opportunity. Tsitsipas won 84 per cent of first-serve points (36/43) and struck 27 winners in the final two sets to clinch his first victory against the World No. 2 on hard courts (1-4).

“I have no words to describe what has just happened on the court, my tennis speaks for itself,” said Tsitsipas, in an on-court interview. “It’s an unbelievable feeling to fight at such a high level and leave it out on the court. I started very nervously. I don’t know what happened after the third set. I flew like a bird and everything worked for me.”

Russian world No.4 Daniil Medvedev on Wednesday beat compatriot Andrey Rublev to reach the semi-final of the 2021 Australian Open at the Rod Laver Arena.

Medvedev beat the seventh seed Rublev 7-5, 6-3, 6-2 and will now face either world No.5 Stefanos Tsitsipas or 20-time Grand Slam champion Rafael Nadal in the semi-finals.

ATP Finals champion Medvedev has thus far won all 11 of his matches against top 10 players since the US Open in September 2020. He goes into the semi-finals on a 19-match unbeaten run.

Rublev stretched Medvedev in the first set amid high humidity at the Rod Laver Arena. The two players traded breaks before Medvedev finally capitalised by breaking Rublev to love. Rublev then struggled with the humidity as Medvedev ran riot.

Earlier, World No.1 and former champion Ashleigh Barty was ousted from the 2021 Australian Open in the quarter-final stage on Wednesday after being stunned by Czech world No.25 Karolina Muchova over three sets at the Rod Laver Arena.

Barty lost the match 1-6, 6-3, 6-2 as Muchova continued taking down higher ranked opponents. She had earlier beaten her compatriot and world No.1 6 Karolina Pliskova before beating 18th ranked Elise Mertens of Belgium in the fourth round.

Barty was utterly dominant in the first set and was continuing in the same vein as she led the second set 2-1. Muchova then took a 10-minute injury timeout which she later admitted she took just to compose herself. The match turned on its head after the match as Muchova reeled off the next 11 of the next 15 games to win the match.