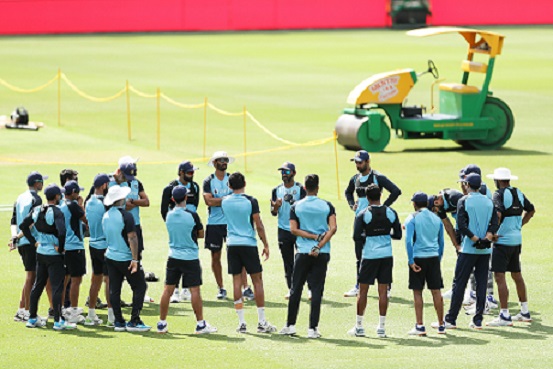 Sydney: India, who are in the middle of strict quarantine and restricted to their hotels, will be tested both mentally and physically when they face Australia in the third Test in the ongoing Border-Gavaskar Trophy that begins Thursday at the Sydney Cricket Ground.

Despite winning the previous Test to bring the four-match series level at 1-1, India have been under the cosh over the past one week with five of their players being investigated for alleged breach of bio-security protocols during a dine-out in Melbourne.

While the team management has restricted the movement of the players to the hotel-ground-hotel routine, it has also decided to field four of the five players in the playing XI for the Sydney Test in a sign of backing their players.

The Aussie line-up, on the other hand, will include dashing opener David Warner with the other batsmen given plenty freedom to go after the India bowlers who until now have kept a tight leash.

India are sticking to the five-bowler theory that has helped them restrict Australia, bringing in right-arm fast bowler Navdeep Saini — who will make his debut — in place of injured Umesh Yadav in the playing XI. They have also included Rohit Sharma as opener in place of Mayank Agarwal.

Rohit is one of the five players investigated for alleged breach of bio-security protocols. Among others out of those five in the playing XI are Navdeep, Rishabh Pant and Shubman Gill.

Apart from the dine-out controversy and an hour that saw them get all out for 36 at Adelaide, India have been on the money with their tight and disciplined bowling keeping the series alive so far.

They lost the first Test at the Adelaide Oval due to an hour of poor batting but came back in a resounding manner through their bowling and stand-in skipper Ajinkya Rahane’s ton to win the second Test at the Melbourne Cricket Ground (MCG).

The Australia batsmen, especially the openers, have struggled to get off to good start putting pressure on the later batsmen as Ravichandran Ashwin, Jasprit Bumrah and others have kept lines that have been difficult to score runs of.

However, the Aussies are entering this Test with a changed strategy and the inclusion of Warner who provides a good start at the top.

Australia captain Tim Paine on Wednesday said that the team would benefit from Warner’s aggressive approach at the top as well as a change in strategy where the batsmen will look to hit over the top, play sweep and reverse sweep against an India attack that has allowed them to cross 200 just once.

Among the Australian wickets, Sydney is supposed to be the closest to an Indian wickets.

Rahane, though, says this match is a fresh start and the previous game is history.

“Unfortunate we will miss Umesh and Shami, but their absence gives opportunities to others. I am very happy for Siraj especially, the way he bowled, he stood for us,” said Rahane.

He said the team is well-prepared for a changed approach by the hosts.

“As a team you have 3-4 plans, you have to see what works for us. When you come here against Australia, you have to have plans, be well-prepared,” said Rahane.

“We had our plans. They really worked for us but what is important for us is to understand what happened in past now, history now. We just have to start well tomorrow’s Test. They have got some good batsmen. We are respecting that, focusing on playing good cricket. We want to play simple cricket,” he added.