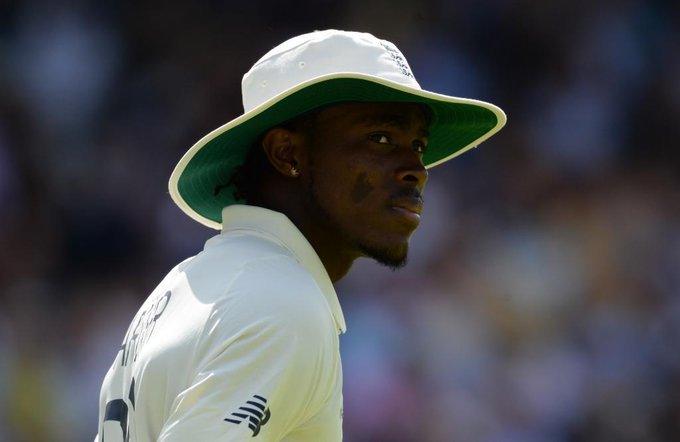 Jofra Archer was impressive at the Lord's Test match.

London: Pacer Jofra Archer and left-arm spinner Jack Leach gave Australia a real scare before Travis Head and Pat Cummins held on to a draw in the high-octane clash after Steve Smith was ruled out with a concussion on Day 5 of the rain-affected second Ashes Test at Lord’s here on Sunday.

Ben Stokes hit a brilliant 115 off 165 balls, his innings laced with 11 fours and three sixes, to put England in a strong position and set Australia a target of 267 after resuming the day on 96/4 after rain which had already washed out five sessions in this match delayed the start by over an hour.

In the final innings of the five-day contest, the Aussies playing without batting mainstay Smith were reduced to 47/3 inside 14 overs before Head (42 not out) and Cummins (1 not out) made sure they did not lose in fascinating fashion to end the match on a stalemate.

Smith’s replacement Marnus Labuschagne, who became the first like-for-like substitute in the 142-year history of Test cricket, gave a good account of himself with a 59 off 100 balls (8×4) before Leach, who had figures of 3/37, had him caught by England skipper Joe Root at midwicket.

The visitors lost David Warner (5) and Usman Khawaja (2) just before tea and were tottering at 46/2. Archer accounted for both the wickets as he finished with figures of 3/32.

Just after tea, Cameron Bancroft (16) departed trapped in front by Leach as the Aussies were in a spot of bother. Head and Labuschagne then shared a vital 85-run partnership to stem the rot.

Once Labuschagne was gone, Mathew Wade (1) and Aussie captain Tim Paine (4) failed to produce any spark. But in the end, Head and Cummins saw off the matter in a tense finish.

Earlier, World Cup final hero Stokes helped the hosts drag themselves out of a hole and post a total of 258/5 before skipper Joe Root decided to declare.

For Australia, who lost key batsman Smith after he was diagnosed with concussion caused by a blow to his neck from England seamer Jofra Archer on Day 4, Cummins was the pick of the bowlers with figures of 3/35.

Archer, who bowled a fiery spell in the first innings picking up two wickets, had out-of-form Warner (5) caught at gully by Rory Burns and in his next over, sent back Khawaja (2) with a caught behind.

At the start of a rip-roaring final day of Test cricket, Stokes, who was 16 not out and Buttler unbeaten on 10, stitched together a 90-run stand for the fifth wicket before Cummins dismissed the latter.

Can he recover in time for the third Test?https://t.co/1LDvynYvP8

Jonny Bairstow (30 not out) and Stokes then took England to a score where Root felt it would be safe to declare and try and push for a win.

Smith woke up on Sunday morning with “a bit of a headache and grogginess”, said a statement issued by Cricket Australia (CA).

He was forced to retire on Saturday while batting on 80 after being hit by the Archer bouncer. However, he cleared a concussion test and returned to the crease before being dismissed for 92.

Another concussion test was conducted before the fifth day’s play as per CA protocol, which “demonstrated some deterioration from his testing which is consistent with the emergence of the symptoms he was reporting”.

Me checking my work mails on Monday morning 🤯#MondayMorning pic.twitter.com/J2YhEoF9Ne