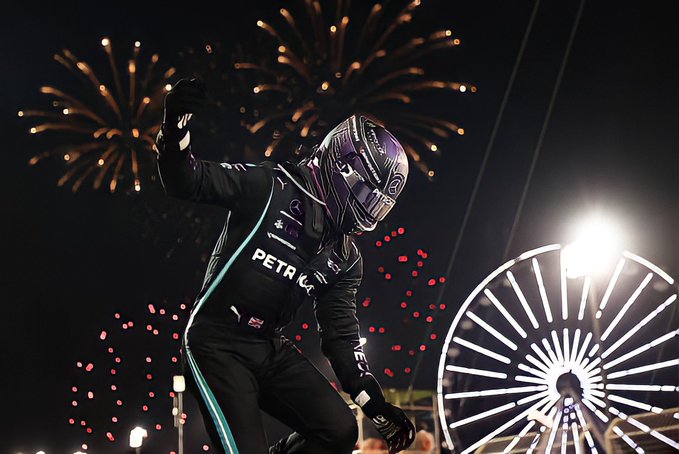 Manama: Mercedes’ Lewis Hamilton won a nail-biting Bahrain Grand Prix season opener, triumphing over the Red Bull of Max Verstappen in a fantastic duel in the desert that went down to the very last lap of the race, as the second Mercedes of Valtteri Bottas completed the podium.

Starting from the fourth pole position of his career, Verstappen had taken control of the race early on, but lost his advantage when Hamilton was able to undercut the Dutchman into the lead in the first round of pit stops.

Following a second stop for both drivers – Verstappen’s coming 10 laps after Hamilton’s – a thrilling finale was set up, Verstappen eating into Hamilton’s lead before attempting a pass on Lap 53 but running too wide and giving the place back.

That would be Verstappen’s last opportunity, with Hamilton able to hold on until the flag to take his 96th career win by less than a second – while Hamilton also passed Michael Schumacher’s record of 5,111 for the most laps led in F1 history.

Behind the duelling lead pair, Bottas finished a distant third after a late stop to successfully gain the fastest lap bonus point, while Lando Norris equalled his result from the 2020 Bahrain Grand Prix with a fantastic drive to fourth for McLaren.

‘We are here to win’: Vettel eyes F1 summit with Aston Martin