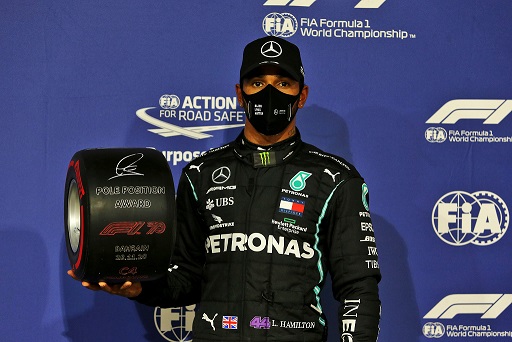 Manama: Formula One champion Lewis Hamilton set a track record at the Bahrain Grand Prix on his way to a record-extending 98th career pole position on Saturday.

The seven-time F1 champion looked in total control as he set a time of 1 minute, 27.264 seconds under the floodlights.

“We did some really good work overnight. I was really happy with the car from the get-go,” the veteran British driver said. “I just didn’t make any mistakes.”

He finished about .3 seconds ahead of his Mercedes teammate Valtteri Bottas and around .4 clear of Red Bull’s Max Verstappen.

Bottas thought he was closer to Hamilton’s time. “I was quite surprised when I saw the gap,” the Finnish driver said. “I definitely have the speed but I haven’t quite got it all together yet.”

After P1 in qualifying in Bahrain, @LewisHamilton is now just two short of a CENTURY of pole positions in F1 😮🤩

Verstappen, however, is resigned to being in Mercedes’ shadow.

“You always want more but it’s important to stay realistic. I’m just pushing as hard as I can with the material I have,” Verstappen said. “We’ll see what we can do tomorrow, it’s quite aggressive on the tires here.”

Verstappen’s teammate Alexander Albon was in fourth place and a full second behind Hamilton, who will bid for his record-extending 95th F1 win on Sunday.

Ferrari’s Charles Leclerc took the first of his seven pole positions last season in Bahrain, but this year the team has struggled badly and he starts from 12th place behind teammate Sebastian Vettel.

Former champion Kimi Raikkonen was among the five drivers eliminated from Q1 while Carlos Sainz Jr. went out of Q2 after his rear tires blocked and his McLaren stalled on the track.
Qualifying was halted for a few minutes while his car was removed.