Bajrang is a favourite to win Olympic gold in Tokyo, stresses Yogeshwar Dutt 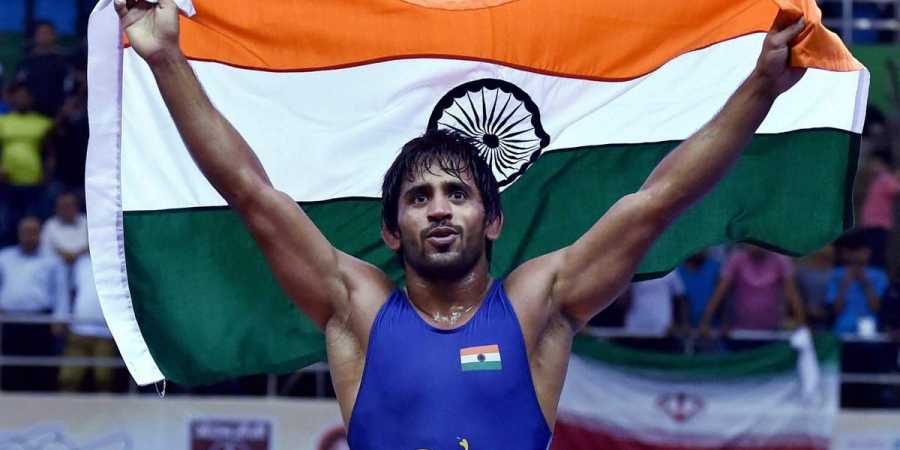 New Delhi: The Indian medal haul in the men’s freestyle categories at the 2019 Asian Championships has been remarkable  in the country’s wrestling history.

With eight medals in the championships of a continent which boasts of several wrestling superpowers and has traditionally won the most Olympic medals in this sport, the Indian grapplers have revived hopes of a good performance at the Tokyo Olympics a little more than an year away.

With gold in the men’s 65 kilogram freestyle category, Bajrang Punia has emerged as  the brightest star for India at this tournament. The 25-year-old from Jhajjar, Haryana, continues his love affair with the Asian Championships clinching five medals in as many editions.

Asserting that this is a prelude to a memorable performance at the 2020 Games, Bajrang’s mentor Yogeshwar Dutt felt that his prodigy is the favourite for winning gold in Tokyo next year.

“This is an unprecedented performance. I am particularly pleased with Bajrang’s performance. He has worked very hard to weed out some of the problems in his technique over the past few months,” Dutt exclusively told Sports Lounge.

“Bajrang is now a big name in world wrestling. He is the  favourite for the 65 kg title at the Tokyo Olympics. I have no doubt that he will make the country proud,” he added.

“We now have 4-5 wrestlers who have the ability to win medals at the World Championships and Olympics.”

Yogeshwar also opined that the arrival of top quality foreign coaches over the last few years has been a major reason for India’s success as the wrestlers are now more aware about modern training techniques.

“We have had foreign coaches for the past several years. Bajrang, Sushil and some of our women wrestlers have taken personal guidance from foreign coaches. Foreign coaches bring a lot of knowledge about the latest training systems and techniques. They help a lot in correcting the small technical problems in our wrestlers’ techniques,” he remarked. 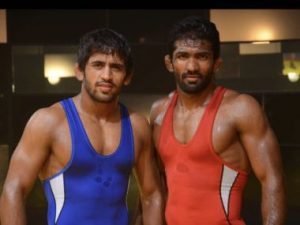 Yogeshwar Dutt (right) feels that his prodigy Bajrang Punia is the favourite for the Olympic title.  Photo: Twitter @DuttYogi

“This is India’s best performance ever at the senior Asian level. But this was not unexpected. We were expecting something like this because there have been a lot of improvements in our training regimen over the past few years.”

Reminiscing about the days when he first started wearing the national colours, the veteran wrestler said that regular success at the international level has infused a lot of confidence in Indian wrestlers.

“Since Sushil took Olympic bronze in 2008, there has been a complete change in the mentality of our wrestlers. The regular wins at the international level has given our athletes a lot of confidence. The fear of failure that was there earlier has been replaced by hunger to win medals,” he said.

“We have also reaped a lot of benefits from the PWL. Regular competitive matches  against top international wrestlers has raised the level of Indian grapplers as a whole,” Tomar claimed.

“The change in mindset is palpable. Now all our wrestlers go to international tournaments with the target of winning gold. In fact, they are disappointed when they settle for medals other than gold.” 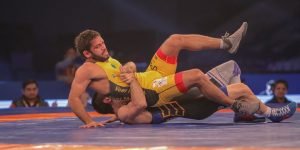 By claiming silver, Amit Dhankar has thrown his hat into the already contentious ring of Olympic selection for the 74 kg category.

But as is often the norm with Indian sports, the bright rays of success comes with intermittent overcast conditions.

The category that could witness a big controversy before the Olympics is the men’s 74 kg division. Having clinched a silver medal at the continental competition, Amit Dhankar has stated his intention of representing India at the World Championships and the 2020 Olympics.

But there are other, and bigger, contenders to the throne.

Sushil Kumar has been battling injuries and poor form over an extended period and had declined to participate in the last nationals. But the veteran star intends to compete at the World Championships later this year.

With Narsingh Pancham Yadav, who had a major row with Sushil before the Rio Olympics, also waiting in the wings, another controversy seems to be in the offing in the run up to the Tokyo Games.

Tomar however, asserted that all contenders for the Olympic squad will have to undergo trials and the WFI will do its best to avoid any controversy.

“Generally the wrestler who wins the Olympic quota gets first preference during selection. But still we will have trials in all categories and the only those who are in the best form will represent India at the Olympics,” he said.

For the sake of Indian wrestling, one only hopes that will be the case.