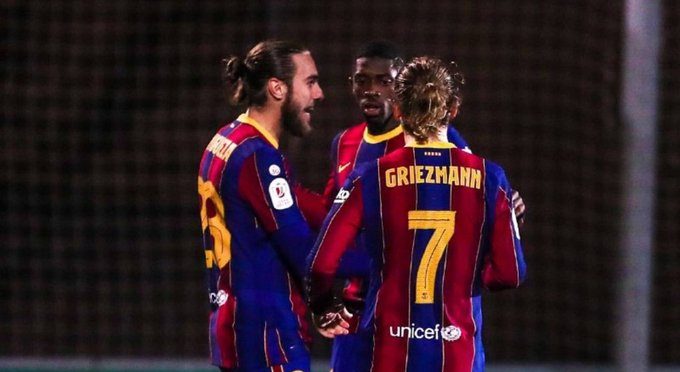 Madrid: FC Barcelona needed an Ousmane Dembele goal in extra time to reach the last 16 of the Copa del Rey away to third-tier Cornella.

Cornella keeper Ramon Juan saved a penalty in each half, first from Miralem Pjanic and then from Dembele 10 minutes from the end of normal time, to keep alive the hopes of the team that had already knocked Atletico Madrid out of the last round.

Dembele finally opened the scoring in the 92nd minute and Martin Braithwaite netted a second goal in the last minute of added time.

Newly crowned Spanish Supercup Champions, Athletic Club Bilbao were also made to work hard as they had to come back from behind before beating Ibiza (also from the third tier) 2-1.

Ibiza humiliated Celta 5-2 in the last round and took the lead in the 11th minute with an excellent goal from Javi Perez.

The home side looked hungry for another upset and had Athletic on the back foot, but Raul Garcia, who came on as a second-half substitute, leveled the game with a 52nd-minute header and Unai Nunez stopped the game from going into extra time with a 92nd-minute winner from close range.

In La Liga, Luis Suarez scored twice, including a last-minute penalty to give his side a fortunate 2-1 win away to Eibar to extend their lead at the top of the table to seven points over Real Madrid and 10 ahead of Barca.

Eibar opened the scoring with a penalty that was confidently scored by goalkeeper Marco Dmitrovic, but Suarez netted from a narrow-angle before halftime and then won the game after he went down easily under a challenge and referee Melero Lopez pointed to the penalty spot.

Valencia and Osasuna drew 1-1 with a result that will please neither side. Osasuna took the lead thanks to Nacho Vidal’s first half volley, but Valencia took a point when Unai Garcia put the ball into his own net while trying to clear Mussa’s low cross aimed at Maxi Gomez.