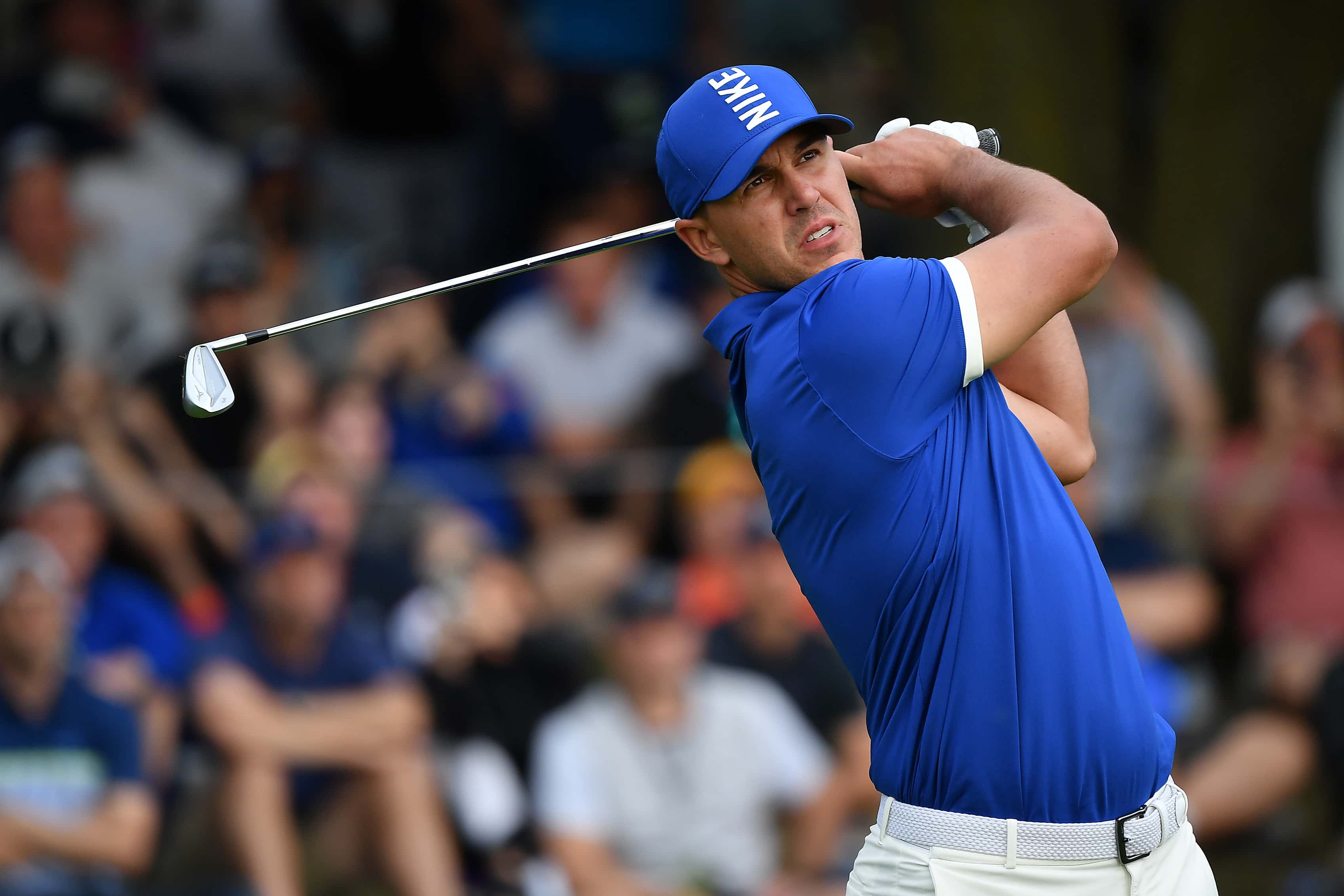 American Brooks Koepka shot 65 to take a huge seven-stroke lead after the second round of the PGA Championship at Bethpage Black late on Friday. Photo: European Tour/Getty Images

Dubai: Brooks Koepka was turning the PGA Championship into a romp as the well-built American muscled his way to a record-breaking lead at the halfway stage of the second Major championship of the season.

On a demanding Bethpage Black course, where par came at a premium for most players in the field, Koepka was a birdie-making machine as he opened up a yawning seven-shot gap on his closest rivals. After his 63 was the best round on Thursday, the 29-year-old added a five-under par 65, which was just one less than the best round on Friday (64 by Australian Adam Scott).

The defending champion, also winner of back-to-back US Open titles over the last two years, reached 12-under par 128 after 36 holes, with American Jordan Spieth (66) and Scott (64) tied for second at five-under 135.

The seven-shot lead at this stage of the tournament was a PGA Championship record and also the largest at the halfway point of any Major since Henry Cotton led by nine in the 1934 Open Championship. His 12-under was two better than the 36-hole aggregate record in all Majors.

The largest margin of victory in a Major championship is 15 shots at the 2000 US Open by Tiger Woods, who had a ring-side view to Koepka’s masterclass as his playing partner, but will be out of action over the weekend after missing the cut following a second-round 73.

Dustin Johnson (67) and the 2018 Hero Indian Open champion Matt Wallace (67) were among a group of players tied for the fourth place at four-under 136.

Asian Tour member and Order of Merit leader Jazz Janewattananond (68) was the best-placed among the Asian players alongside Korean Sung Kang (70), winner last week at the AT&T Byron Nelson Classic on the PGA Tour. The duo was tied 10th at two-under par.

Koepka started his round with back-to-back birdies and reached 10-under par on the par-5 fourth hole when he failed to make a 17-feet eagle putt. There was a bit of a stutter thereafter when he made his first bogey of the tournament on the 10th hole and then three-putted for another on the 17th. But he also picked up shots on the 13th, 15th, 16th and 18th for his 65.

After Thursday’s round of 63, Koepka had said there was still room for improvement, and he called his 65 a ‘battle’. Imagine what would he do if he has two perfect days during the weekend.

“Today was a battle. I did not hit it very well today, I was fighting a bit of a block. I was able to find a couple of fairways and when I did miss, I was in a great lie. I’m still putting really well which is big,” said the World No. 3.

“I feel good, especially the way I battled today, to not have it and get that score I am very proud of myself. I fought hard, I feel great and just need to continue on the weekend.

“Yeah, I’d like to see that lead grow as large as it possibly can. I still have to go out there and do what I’m supposed to do. Keep putting the ball in the right spots and make sure that you don’t make any double bogeys, and I should have a good chance of winning the championship.”

Woods, who won the Masters last month with Koepka finishing second, was all praise for his playing partner after missing the cut by one shot.

“I made too many mistakes and just didn’t do the little things I need to do. I had a couple three-putts. I didn’t hit wedges close and I didn’t hit any fairways,” said the 43-year-old.

“What Brooksy did, he’s driving it 330 yards in the middle of the fairway. He’s got 9-irons when most of us are hitting 5-irons, 4-irons, and he’s putting well. That adds up to a pretty substantial lead, and if he keeps doing what he’s doing, there’s no reason why he can’t build on this lead.”

But the American, who has dropped to No. 39 in the world ranking, insisted he wasn’t thinking about the career Grand Slam.

“It certainly hasn’t. I can’t imagine it will because I haven’t been in contention on a Sunday since The Open last year,” said Spieth after a round that included six birdies and two bogeys.

“If I’m able to put some good work in tomorrow, then I will be in contention on Sunday and at that point it will be just more (thinking) of trying to win a golf tournament. It won’t matter to me what tournament it is.

“I’ll be pleased to be in contention, knowing that the work I put in from being pretty far off has really come back nicely on a very difficult golf course. I imagine that will take pretty much most of my thoughts, but we’ll see. I’m not sure what to expect.”

After his round of 64, which included a late bogey on the par-3 17th hole, Scott felt there was still a chance of catching up with Koepka.

“I think there’s doubles left and right out there once you get out of position. Hey, if the guy (Koepka) can just keep doing that for another two days, then there’s not much you can do,” said the former Masters champion.

“But I think someone, hopefully me, will chip away tomorrow and sneak up in the right direction. If he didn’t have a hot day tomorrow, the gap narrows and there’s pressure over whatever lead he might have or might not on Sunday.

“Yeah, I know he’s won three Majors. I know he seems impenetrable at the moment in this position, but at some point he’s got to think about it.”

The 23-year-old Janewattananond was clearly enjoying his experience.

“I am out here without expectations. So even if I shoot 90 tomorrow, I won’t mind it. You know, just being here is already good,” said the Thai star.

“My expectation was to come out here and have some fun and see what Majors are all about. It’s the first time on the East Coast. I am enjoying myself. I am really happy I put up a good score, so it exceeded my expectations for sure.”