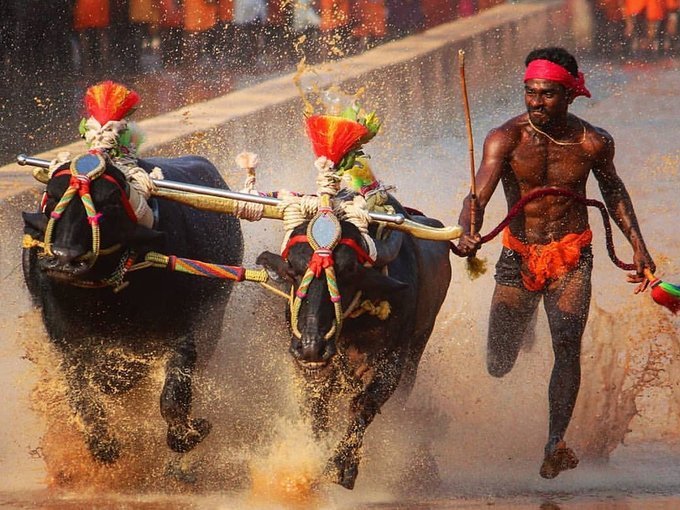 New Delhi: Kambala racer Srinivas Gowda, whose running exploits during a traditional buffalo race in Karnataka has evoked a social media frenzy, will be assessed by expert coaches at SAI Center, Bengaluru on the instruction of sports minister Kiren Rijiju.

Rijiju has asked the top SAI coaches to conduct a trial of the 28-year-old Kambala jockey Gowda after video clips of him running a distance of 100 metres in just 9.55 seconds have surfaced.

Gowda, a construction worker from Moodabidri, took just 13.62 seconds to run a distance of 145m, covering the first 100m in 9.55 seconds, at the Kambala at Aikala village near Mangaluru, promting some on social media to compare him with multiple Olympic gold medallist Usain Bolt, whose 100m world record is 9.58 seconds.

“I’ll call Karnataka’s Srinivasa Gowda for trials by top SAI coaches. There’s lack of knowledge in masses about the standards of Olympics especially in athletics where ultimate human strength & endurance are surpassed. I’ll ensure that no talents in India are left out untested,” Rijiju wrote on his twitter handle on Saturday.

Sports Authority of India (SAI) later said on Twitter that Gowda’s train tickets have been booked and he will be assessed in Bengaluru on Monday.

“We have reached out to #SrinivasaGowda and booked his train ticket. He will be in SAI’s Bangalore center on Monday where our coaches will assess him. We hope to identify and nurture more talents with inputs from all sports enthusiasts,” the SAI wrote.

Kambala is an annual race held in Karnataka where people sprint 142m through paddy fields with buffalo. During the race, the racers try to bring the buffaloes under control by holding their reins tight and beating them up, making it amply clear that the animal plays an equally important role in achieving the timing.

Traditionally, it is sponsored by local Tuluva landlords and households in the coastal districts of Dakshina Kannada and Udupi.

Congress leader Shashi Tharoor and business tycoon Anand Mahindra tweeted to ask Sports Ministry and Athletics Federation of India to take Gowda under its wings while some athletics experts were not amused at the feat of Gowda.

Athletics Federation of India President Adille Sumariwalla said that he would be happy to take in Gowda if he is found to have the credentials to compete at the highest level after an assessment by the top coaches.

“Running 100m in Olympics or World Championships or any other top international event is not comparable with running in a buffalo race but I have no problem if he (Gowda) has it in him to run so fast, you never know.”

But some athletics experts were sceptical about the whole issue.

“Gowda was shown running behind the buffaloes and not ahead of them. Secondly, how was the time measured, by a wrist watch or a stopwatch? Electronic clocks the world athletics use can record a fraction of a second. How did they know it was 9.55 seconds?” an expert asked.

“I am not sure what kind of measurement was used in the buffalo race. How exact was the measurement of 100m mark? asked another.