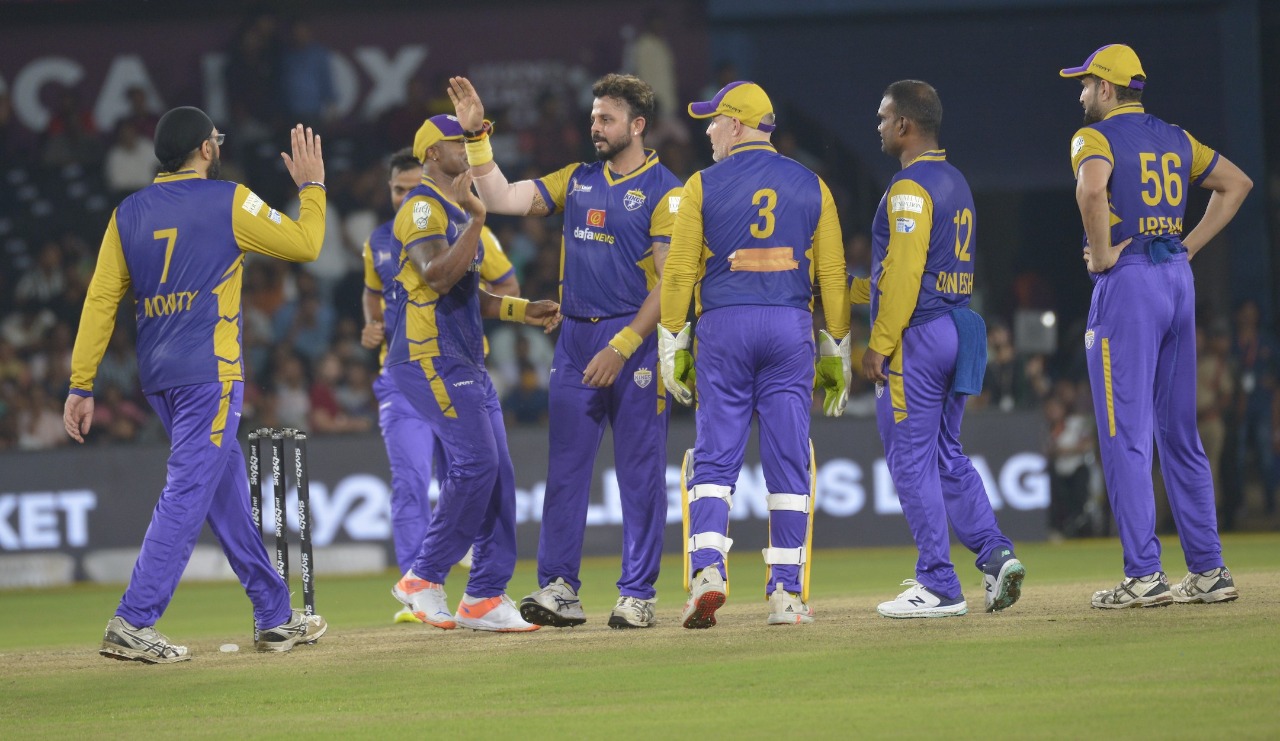 Cuttack: Gujarat Giants had stalwarts Virender Sehwag and Chris Gayle in their batting arsenal, yet Bhilwara Kings outshone them with a royal batting display in the 9th game of the Legends League Cricket (LLC) at the Barabati Stadium here on Tuesday.
A collective effort with the bat saw the Kings tear apart the Giants’ bowling attack to post 222/4. Then their bowlers backed up the batters’ effort by keeping a tight leash on the Giants’ powerful batting line-up. The Giants were all out for 165 to give the Kings a 57-run victory.
With this win, the Kings, who lost narrowly to Manipal Tigers on Monday, now have five points, the same as the Giants and India Capitals.
The tough chase never took off for the Giants as they kept losing key wickets. The in-form Kevin O’Brien was out in the second over, which saw captain Sehwag join ‘Universe Boss’ Gayle at the crease. Playing his first game of the League, Gayle could not really unleash his monstrous hits and was out for 15.
Sehwag started to find his form and hit three fours and a six but was out for 27 off 20 balls. Thereafter, none of the Giants’ batters managed to get a foothold in the middle. Yashpal Singh, coming in at No.9, finished with a flourish, making 57 of 29 balls, but that was not enough for his team.
Former India speedster S. Sreesanth turned the clock back, picking up 3/36, while off-break bowler Jesal Karia (2/22) and Caribbean pacer Fidel Edwards (2/30) too were successful with the ball.
Earlier, Giants’ skipper Sehwag won the toss and opted to field, but thereafter almost nothing went in his team’s favour as fours and sixes rained from the Kings’ bats.
Kings’ openers William Porterfield and Morne van Wyk went on the offensive from the word go as they plundered a mind-blowing 76 without loss from the six Powerplay overs. Nothing seemed to work for the Giants bowlers as the Kings raced to 100 in the ninth over.
Irishman Porterfield was the first to get out, but only after he had played a whirlwind knock of 64 off 33 balls with 10 boundaries and two sixes. South African Van Wyk (50 off 28 balls) was out soon after. Then, Kings captain Irfan Pathan, who promoted himself up the order, clobbered three sixes and a four to make a 23-ball 34.
Following Irfan’s dismissal, brother Yusuf Pathan took over, smashing the first two balls he faced for two huge maximums. Karia too played an important knock of 43 off 29 balls. The Kings took 24 runs from the last over of their innings.
Brief Scores: Bhilwara Kings 222/4 in 20 overs (M van Wyk 50, William Porterfield 64, Irfan Pathan 34, Jesal Karia 43). Gujarat Giants (Yashpal Singh ).
Bhilwara Kings won by 57 runs.
“Get more sports news, cricket news and football updates, log on to sportslounge.co.in. Follow us on Facebook or Twitter and Subscribe to YouTube Channel.”
Related Topics:Bhilwara KingsChris Gaylecricket news todayGujarat GiantsLegends League CricketVirender Sehwag
Up Next

England ‘offers’ to be neutral venue for India-Pakistan Test series, BCCI ‘not interested’