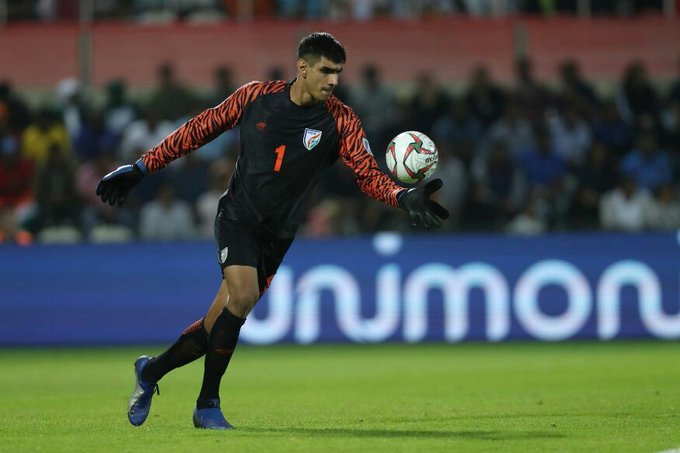 New Delhi: As India gets set to celebrate its 74th Independence Day tomorrow (August 15, 2020), Blue Tigers goalkeeper and Arjuna awardee Gurpreet Singh Sandhu wished fans across the world and stated that playing for the country “is a feeling like no other.”

In a chat with AIFF TV, he stated: “There’s no feeling like playing for the country. You want to play as many games as you can for your nation. It’s something really special and we are all raring to go back, I can assure you. I would like to wish a Happy Independence Day to all my fellow Indians in the country as well as outside. Stay safe, take care of your families and enjoy the day. Look forward to seeing you at stadias soon.”

Gurpreet has been a key figure in the new generation of the Indian National Team, also asserted that Indian football “belongs at the top” and that the team will not take anything below that.

“Indian football belongs right at the top. We deserve as much respect as any other team. We won’t take anything less. We are hardworking people and have been striving hard for results. We are not to be taken lightly and we would like to gain the same respect from any opposition that plays against us. That’s what we play for,” a confident Gurpreet, the first Indian to ever play in the UEFA Europa League averred.

Gurpreet, who has been living in Sydney over the last few months has been training under the watchful eyes of former AC Milan and Socceroos custodian Zeljko Kalac, who is also a UEFA Champions League winner with the Italian side.

“I came here (in Sydney) before the country shut down their borders and after that, they did an extreme lockdown where you can’t go out. So, I was working out at home for a couple of months. When the restrictions eased out, I reached to Erik (BFC teammate Erik Paartalu) was training with him about a couple of times in a week,” he informed.

“But for almost a month now, I have been training with the goalkeeping coach of Sydney United 58. It has been really good. It is being coached by the legendary goalkeeper Zeljko Kalac, who has played for AC Milan. He has been kind enough to allow me to train with the club and it has been great to get that kind of exposure while also enjoying some family time. It has been a pleasure,” Gurpreet said.

With a decade’s experience of professional football behind him, Gurpreet reflected on the changes he has seen among players in this time period and pointed out the increase in the “level of knowledge” as a crucial aspect.

“The level of knowledge and exposure today’s generation of players have as compared to back then — there’s been a big change. Now it’s much more and information is easier to get. A player like Sunil Chhetri, who was there at that time is still at the top of his game and he has changed his habits. Young players can follow looking at his example or looking at Sandesh (Jhingan) or me. That’s how it works,” he stated.

The 197 cm-tall frame of Gurpreet, who is fondly referred to as ‘The Wall’ by fans, has worn the captain’s armband for the Blue Tigers on seven occasions, including the momentous 0-0 draw against Asian champions Qatar in Doha in September last year. He termed the result as an “emotional moment” for him and shared some fond memories from the game.

“It’s a really good memory. All of us were trying to give our best on the pitch and ensure that we do not commit any mistake. You are facing the best team in Asia and if you give them an inch, they will take the whole hand.

“We were very proud of the result. We had worked so hard and relentlessly. I was really emotional. Before the game, we saw predictions like that we would lose by a heavy margin. I’m happy that I could share that moment with the people in the stands. We proved that everyone is equal when they step on to the pitch.”

‘I come to win trophies’: Willian after joining Arsenal from Chelsea