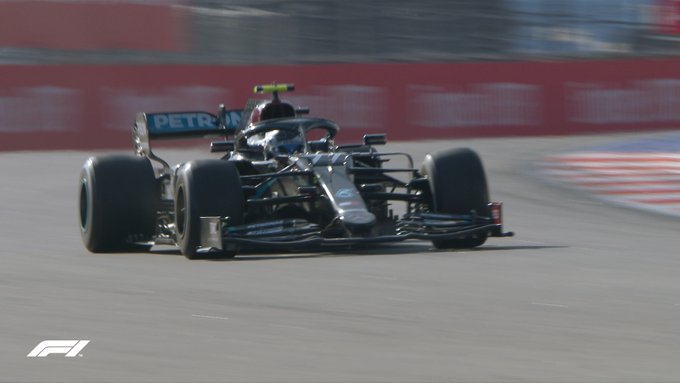 Sochi: Valterri Bottas on Sunday secured his second win of the 2020 season at the Russian Grand Prix after a 10-second penalty that his Mercedes team mate and championship leader Lewis Hamilton sustained meant that the Brit finished third.

Hamilton started on pole, chasing a 91st win that would have helped him equal Formula 1 legend Michael Schumacher’s record for most race wins.

However, a pair of practice start infringements on his laps to the grid led to him being handed a 10s penalty mid-race. He dropped down to 11th after serving the penalty and managed to fight his way up to third.

Bottas, meanwhile, had passed Verstappen for second at the race start, before benefitting from Hamilton’s penalty to enjoy an untroubled run to the chequered flag for the ninth win of his career.

Ricciardo’s team mate Esteban Ocon passed the Australian at the start for P4, but eventually fell back to the seventh place, ahead of home hero Daniil Kvyat.

A late stop from the Kvyat’s AlphaTauri team mate Pierre Gasly allowed him to battle through to P9, the Frenchman passing the Red Bull of Alex Albon, who came home P10, having started P15 after receiving a five-race penalty for changing his gearbox.