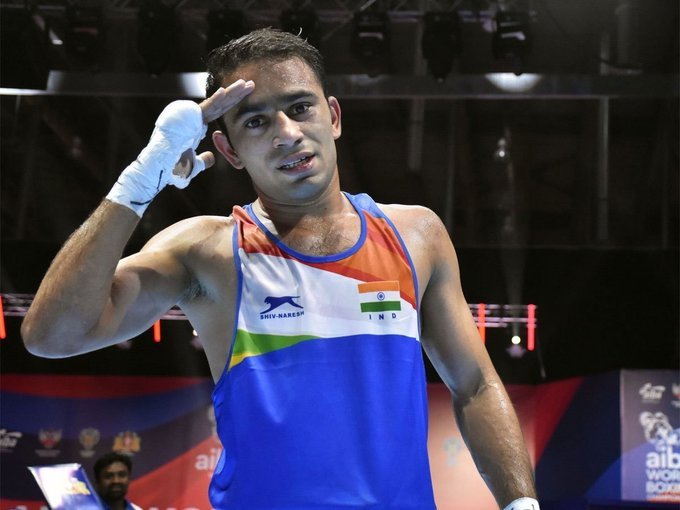 Dubai: Having learned the art of tackling taller opponents, Olympic Games-bound Amit Panghal relied on those skill to score a 5-0 win against Kazakhstan’s Saken Bibossinov on Friday and enter the gold medal match of the 54kg category in the Asian Boxing Championship here.

Panghal, 25, will take on the 2016 Rio Olympic champion Zoirov Shakhobidin of Uzbekistan in the final match on Monday.

India is now assured of at least five silver medals, with four women making their way into the finals earlier on Thursday. With 15 medals confirmed, the Indian contingent also achieved its highest medal haul, surpassing the previous best of 13 — two gold, four silver, and seven bronze — medals won in 2019 in Bangkok.

Lightweight Panghal, the world silver medallist, had also defeated Bibossinov in the semi-finals of the 2019 World Championships and both were well versed with each other’s tactics.

Bibossinov, 29, the 2019 world bronze medallist, fought hard but couldn’t match his nippy rival. He employed the tactics of dropping his guard, but Panghal was smart enough to stay out of the reach of his taller opponent throughout the thrilling contest.

Panghal preferred to attack in short swift bursts and was equally quick on the counter attacks to score 5-0 win.

In the quarter-final, Panghal had defeated Kharkhuu Enkhmandakh of Mongolia 3-2.

There are four more Indians in the semi-finals, to be played on Friday night. Among the semi-finalists, India’s Vikas Krishan (69kg) who will face reigning Asian Games champion Baturov Bobo Usmon of Uzbekistan.