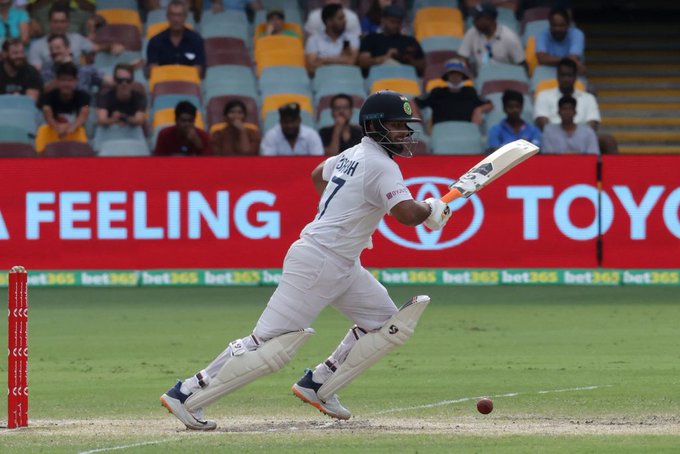 Earlier, Shubman Gill stroked his way to an attractive 91 while Cheteshwar Pujara defended dourly as India reached 183/3 at tea in pursuit of a challenging 328 on the final day of the fourth Test against Australia here on Tuesday.

Senior opener Rohit Sharma (7) got a beauty from Pat Cummins (10-6-7-1), which he had to play and the edge was taken by a diving Tim Paine in-front of first slip.

Gill (91 off 146 balls), with his easy to the eye batting, repeatedly peppered the off-side field.

Pujara (43 batting) and Risabh Pant (10 batting) were at the crease.

India still need 245 runs in the final two sessions (62 overs maximum) but at this point it doesn”t look like they would be going for the chase as a draw would be enough to keep the Border-Gavaskar Trophy.

The fifth day pitch at the Gabba seemed to be pretty flat with not much help for the Australia pacers as Gill played a few cut shots and comfortably drove on the up.

When he was given the liberal dose of short balls, Gill was happy to play the pull-shot.

With no lateral movement either in the air or off the pitch, Gill looked comfortable with his “playing beside the line of the ball” technique.

Against the ”100 Test man” Nathan Lyon, Gill came down the track to hit a flowing cover drive even as the seasoned off-spinner”s tactic of not having close-in fielders on the off-side invited sharp criticism from Shane Warne, who was on air.

The placid nature of the track also didn”t help the Australians who kept a attacking field for the better part of the session.

Among Gill”s shots, the backfoot cover drive off Josh Hazlewood would stay with any fan for the longest time. He also used Mitchell Starc”s bounce to slash him over backward point for a six.

In all, he also smashed five boundaries during the session.

In fact, his second half-century was a double that he got with a back-foot punch through the covers.

Pujara, at the other end, faced a lot of short deliveries from Cummins, which he ducked and took a few blows on the body. But with Gill scoring freely at one end, the Saurashtra man was happy to be in his zone defending doggedly which was the need of the hour.