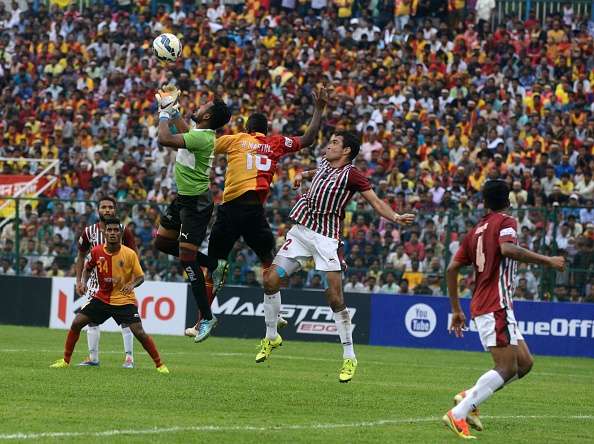 New Delhi: The centenary Durand Cup in 1987 was a memorable meet. All clubs lined up in full strength to battle it out at Delhi’s Ambedkar Stadium. In the end, JCT had the last laugh. Young striker Kuljeet Singh played havoc as the Punjab side pipped Mohun Bagan in the final in front of a sell-out crowd.

Players of the 1987 JCT squad, however, remember the triumph for a different reason altogether. What they still boast about is how they defeated all three Kolkata majors in a span of less than one week to take the trophy to Phagwara.

Beating Mohun Bagan, East Bengal and Mohammedan Sporting, especially the first two, was considered an achievement once. To defeat them on their home turf was simply impossible. Even to tame them outside was Indian club football’s toughest task.

The equation has changed in the last decade or so. Completely. In the 13th edition of I-League beginning Saturday, they are just two more competing sides. Despite their tall claims on tradition, legacy and huge support base. Serious contenders they still are. But definitely not the teams to beat.

The success story at the end of every season builds the reputation of a great side in football. That’s the usual trend all over the world. In 12 years of I-League history, the combined accomplishment of two Kolkata sides is just one title triumph. Nobody remembers who finished close second or gallant third.

One remembers the nondescript Airlines Gold Cup in Kolkata in 1994 hit the headlines when Border Security Force (BSF) beat East Bengal in the final.

It created a stir. No non-Kolkata Indian club since the now-defunct Mumbai’s Indian Culture League in 1953 IFA Shield could reach the Howrah railways station with a winners’ trophy in hand. The Jalandhar based para-military side staged a coup of sort.

The latest statistics speak differently. The NFL was renamed I-League in 2007-08 season. Since then, Mohun Bagan and East Bengal have lost more than 25 home matches each in I-League, in Kolkata, Siliguri and Kalyani. Outstation teams beat them fair and square all across the state of West Bengal.

Some still feel I-League is more about Mohun Bagan and East Bengal. Mainly because of their loyal support base. It’s true only to an extent. Sheer lack of professional approach and selfish management have reduced them to ordinary sides.

Their fans may disagree and feel upset. They are advised to have a look at result sheets.

Mohun Bagan and East Bengal’s positions in the current I-League are of reluctant participants. That they are jumping the fence to move on to greener pastures next season is a well-publicised fact. But can they leave with their heads high?

More importantly, can Mohun Bagan and East Bengal live up to their reputation in the new life after the immigration?

The ISL-I-League combine has opened a new pathway for Indian football in last five years. It is about modern soccer management that helped create several successful ventures.

Relatively young people in Aizawl, Chandigarh, Chennai, Srinagar, have done wonders in their maiden ventures. A five-year old club in Kolkata have won more titles than their senior citymates combined. More and more fans will surely rally behind them in near future.

Former India coach Bob Houghton once commented that 60,000 people watching every Mohun Bagan versus East Bengal match is a good reason for raising the curiosity of social scientists. But it makes no impact on progress of Indian football.

In the last few months, Mohun Bagan and East Bengal have done everything except winning crucial matches. They formed a kind of union of I-League clubs (which they expectedly deserted soon), made empty noises about going to court against the parent body and soon did a volte-face to “secure” their future.

In between, they faltered in every tournament they participated this season. Including the local league.

The ‘Big Two’ have lost out on what was their biggest strength. Winning matches in the face of all adversity. That made them the country’s biggest and most popular clubs.

They have to retain that habit. Soon enough. Legacy, tradition and fan base won’t take them very far. Not even change of floors.