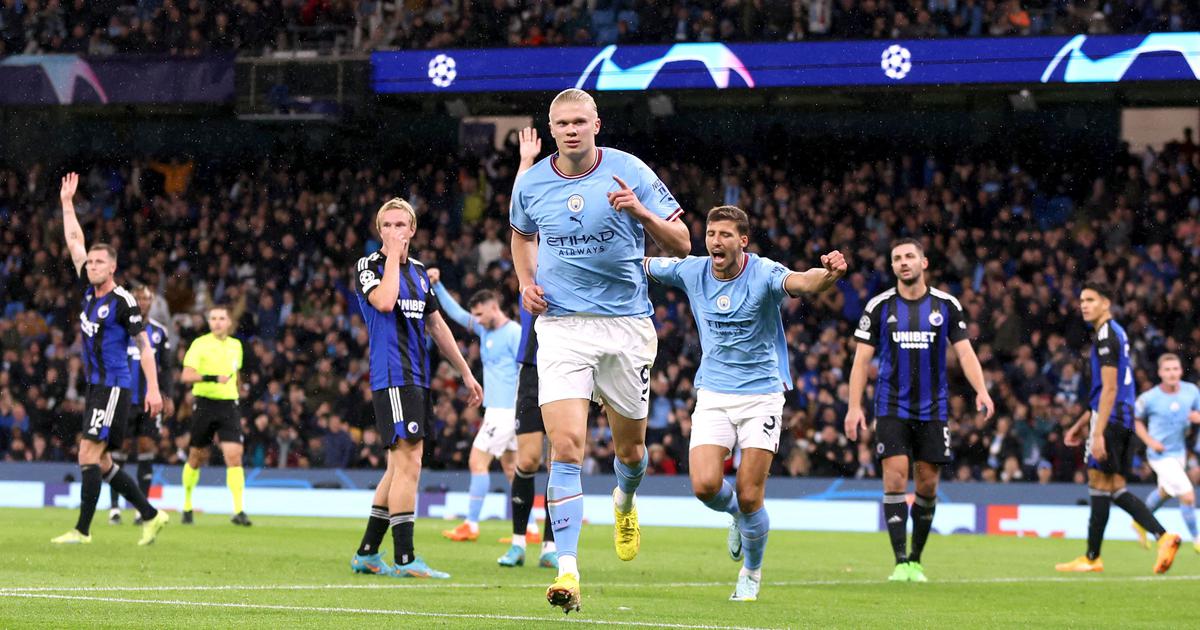 Erling Haaland continued his remarkable goalscoring form by netting twice as Manchester City thrashed FC Copenhagen 5-0 in the Champions League on Wednesday, while Chelsea saw off AC Milan to revive their hopes of reaching the last 16.

Holders Real Madrid survived a spirited challenge from Ukrainians Shakhtar Donetsk at the Santiago Bernabeu to win 2-1 and extend their advantage in Group F.

Lionel Messi scored but Paris Saint-Germain were held to a 1-1 draw by Benfica in Lisbon.

Haaland went into City’s game against Copenhagen at the Etihad Stadium having becoming the first player in Premier League history to score three successive home hat-tricks in Sunday’s demolition of Manchester United.

The Norwegian slammed in the opening goal on seven minutes with his weaker right foot before prodding in a rebound for his second 25 minutes later.

The 22-year-old has now scored 28 times in his 22 Champions League appearances, already breaking Ruud van Nistelrooy’s record for most goals in a player’s first 30 games in the competition.

“I’ve never witnessed anything like it in my life,” City’s Jack Grealish told BT Sport.

“For the first and second goals I was just laughing. He is always there.

“The ‘keeper said something to me as I was walking back. He said ‘He’s not human!’ I said ‘You’re telling me?’ Hopefully he can carry on this form and take us to glory.”

Visiting centre-back Davit Khocholava put through his own net, with Haaland waiting behind him, to make it three before half-time.

Haaland was denied a fourth City treble as he was replaced at the interval, but a Riyad Mahrez penalty and Julian Alvarez’s fourth goal for the club completed the rout.

Pep Guardiola’s men remain three points clear of second-placed Borussia Dortmund in Group G and will qualify for the knockout phase with a victory in the Danish capital next week.

Jude Bellingham scored for the third time in as many Champions League outings as Dortmund romped to a 4-1 victory at Sevilla.

The Spanish club responded to the defeat – and a desperately poor start to the season which has left them 17th in La Liga – by sacking coach Julen Lopetegui shortly after the final whistle.

Chelsea ended their wait for a win in Group E as goals from Wesley Fofana, Pierre-Emerick Aubameyang and Reece James sealed an impressive 3-0 triumph over Italian champions AC Milan at Stamford Bridge.

The Blues made it back-to-back victories under new boss Graham Potter to set up a crucial clash at the San Siro in six days’ time.

Chelsea are second in Group E, level on points with third-placed Milan, one point behind leaders Salzburg who edged out Dinamo Zagreb 1-0.

“It’s easier when you win games,” said Aubameyang. “The mood is very good at the moment. We’ll try to keep it up.”

Shakhtar put on a battling display in Madrid, with goalkeeper Anatoliy Trubin making 11 saves, but could not overcome a two-goal deficit against Real.

Goals in the first half-hour from Rodrygo and Vinicius Junior put Real in control and the 14-time champions made it three wins from three in Group F despite Oleksandr Zubkov’s effort for Shakhtar.

Madrid will be sure of a last-16 spot if they can beat second-placed Shakhtar next time out.

RB Leipzig are just a point behind Shakhtar after Joe Hart’s error helped the Germans down Celtic 3-1.

The former England goalkeeper’s poor pass led to Andre Silva restoring Leipzig’s lead in the second half before the Portugal striker netted again late on.

Benfica remain level on points with leaders PSG at the Group H summit after a hard-fought draw against one of the tournament favourites.

Messi produced a trademark left-footed finish into the top corner after a neat exchange of passes also involving Neymar and Kylian Mbappe to score his 127th Champions League goal in the 22nd minute.

Benfica levelled four minutes before the break as Danilo Pereira scored an own goal and both sides spurned chances to win in the second half.

Messi only scored 11 goals in 34 games in his first season for PSG last term, but already has eight in 13 this time around.

“It’s normal, it takes a little time,” PSG skipper Marquinhos told Canal Plus. “Now he feels a little more comfortable… I hope Leo Messi has a great season until the end to win this title.”

Juventus moved within four points of the top two as Adrien Rabiot’s brace and a Dusan Vlahovic goal gave the Italians a 3-1 victory over Maccabi Haifa for their first points.