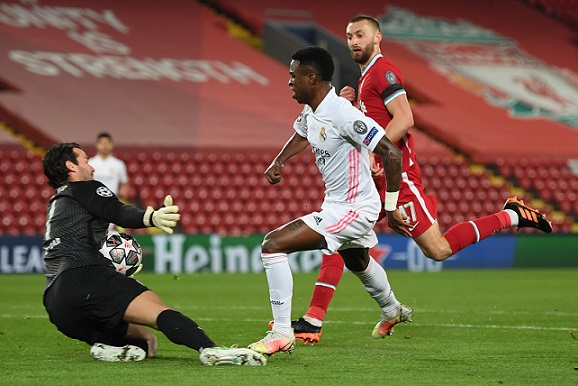 Liverpool: Zinedine Zidane has shown Jürgen Klopp just how to turn a season around.

Zidane is leading Real Madrid into the semifinals of the Champions League. Klopp will finish the season without a trophy.

A 0-0 draw at Anfield in the quarterfinals on Wednesday protected a 3-1 advantage from the first leg for Madrid. The record 13-time European champions are back in the semifinals — where Chelsea awaits — for the first time since 2018 when Zidane lifted the European Cup for a third consecutive season by beating Klopp’s Liverpool in the final.

“We’re all pulling together,” Zidane said, “and this side always does that and it always wants more.”

Riyad Mahrez and Phil Foden scored Manchester City scored twice in the second half to each the Champions League semi-finals for the first time in six years after beating Borussia Dortmund 2-1 on Wednesday.

Foden, who scored the winner in City’s 2-1 first-leg victory, fired in off the post in the 76th minute after Mahrez had converted a 55th-minute penalty to secure a 4-2 aggregate triumph and send City into the last four for the second time.

“It means a lot, this club this team deserves it,” City midfielder Ilkay Gundogan said. “We are grateful for being in a great competition, reaching the semi-final for the first time with this team.

“This Borussia team has a lot of quality,” he said. “On a good day they can beat everyone. It’s about staying in the game, attitude, personality, especially in that stage of the competition.”