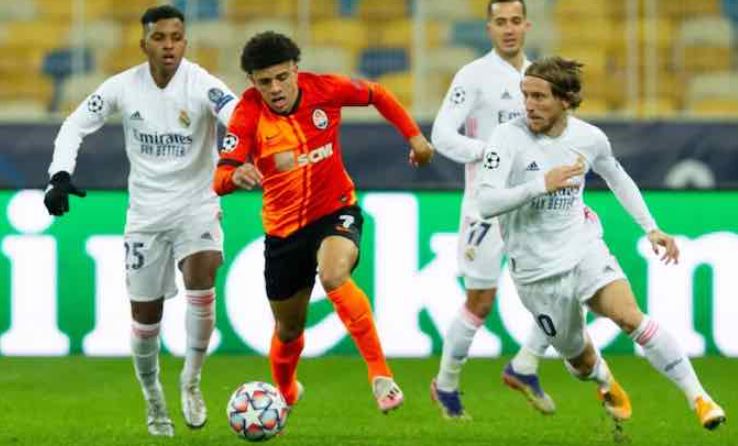 London: The Ukrainian club Shakhtar Donetsk have done it again as they thrashed Real Madrid by 2-0 in the Champions League on Tuesday night. The Spanish club’s poor defence led to their embarrassing defeat.

Heading into Matchday 5 of the Champions League, Zinedine Zidane’s side could have secured their spot in the Round of 16 with a win. Instead, they suffered another defeat by the team that currently lies second-place in the Ukrainian Premier League.

Defensively, Real Madrid weren’t threatened much in the first half. But a 57th-minute goal from Dentinho put Shakhtar ahead of the visitors, and an 82nd-minute strike from Manor Solomon assured the victory.

In the other match of Group B, Romelu Lukaku scored twice in the second half to steer Inter Milan to a vital win at Borussia Moenchengladbach.

Moenchengladbach are top on eight points from five games, one ahead of Shakhtar Donetsk and Real Madrid after the Ukrainians earlier beat the visiting Spaniards 2-0. Inter have five points. All four teams will battle to reach the last 16 on the final matchday.

Despite fielding a team full of young players against Atletico Madrid, Bayern Munich managed to keep their unbeaten run in the UEFA Champions League intact.

Diego Simeone’s side took the lead through a well-taken Joao Felix goal and did well for the rest of the half to take a 1-0 lead. Bayern played more cautiously in the second half and a smart move by the holders resulted in Thomas Muller getting fouled in the box. The German dispatched his penalty with authority to earn a point from the game.

Liverpool are through to the last 16 of the Champions League as they secured top spot in Group D thanks to Curtis Jones’ goal at Anfield against Ajax which gave Jurgen Klopp’s men all three points.

Manchester City and FC Porto through to last 16

After a frustrating 80 minutes, substitute Gabriel Jesus had broken the deadlock when he tapped home, but the effort got ruled out because Joao Cancelo was offside. As a result, the match tied and both the teams qualify for the Champions League last 16.