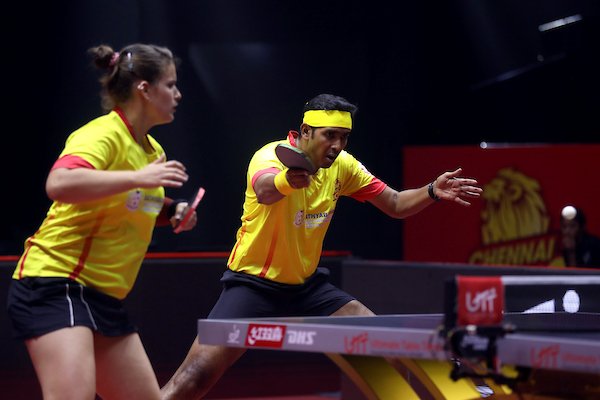 The Paltan enjoyed a dream debut in the tournament as they bested Season 2 champions Dabang Delhi T.T.C. to announce their arrival, however, it all went in ineffective.

Petrissa cruised the Lions’ begin on a strong note, with a 3-0 win over Ayhika in an intensely fought women’s singles opening encounter.

Although ranked 108 places below world number 26 Solja, Ayhika showed great composure and fighting spirit as she made her opponent sweat in the first game.

A 👀 into Tie 4⃣ where we witnessed @chennailionsttc register their first win of the season! 👌🙌🏻

Fresh from her CWG TT gold medal triumph on Odisha, Ayhika appeared confident and fired up. She raced to a 5-2 lead before Rio Olympic silver medallist Petrissa relied on her experience to pull level at 5-5.

From there on, Petrissa showcased some deft touches and superb net play to take a handy 10-8 lead. Ayhika fought back hard and saved two game points before Petrissa finally pocketed the opening game on the golden point (11-10).

The second game began in the same vein, with Petrissa being tested by her younger opponent, who was cheered wildly by the home crowd. Ayhika led 2-0 but thereafter lost her way.

Petrissa opened up a huge lead at 10-5 and sealed the game at 11-6. The final game (11-8) too went Petrissa’s way, who survived some anxious moments to stave off a dangerous-looking Ayhika to hand Chennai the early advantage.

Chennai consolidated on their lead when Apolonia came from a game down to defeat Desai 2-1 in the opening men’s singles match.

Stretched by Desai in the opening game which he lost 8-11, thrice Olympian Apolonia showed exemplary agility and game reading to make a brilliant comeback.

In the second game, Apolonia and Desai breathed down each other’s necks and were well poised at 5-5 and then at 9-9. Once again experience came to the fore, with Apolonia winning the game on golden point (11-10) to take it to the decider.

Apolonia was in his element in the final game, often playing away from the table and taking advantage of his height to quell Desai’s challenge (11-7).

The mixed doubles too went Chennai’s way. Sharath-Petrissa had an easy run in the opening game, winning it 11-7 and kept up the good work throughout. They pocketed the following games 11-7 and 11-6 to hand Chennai the win as they now led 8-1 overall.

Later, in the second men’s singles, Puneri Paltan’s Chuang Chih-Yuan beat Sharath Kamal 2-1 (11-5, 11-10, 3-11) in what was another gripping contest. Despite losing the first two games, Sharath showcased some delightful shots in the third to reel one point off Chuang.