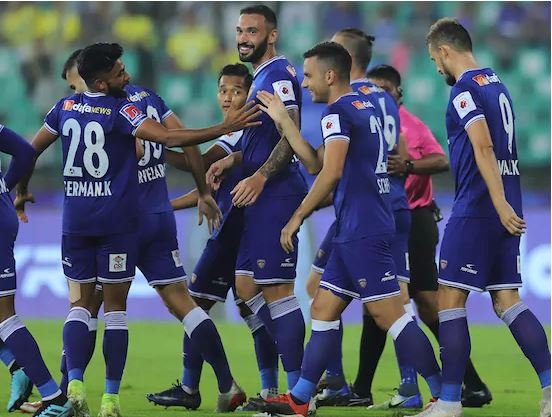 Chennai: Struggling to move up the points table, laggards Chennaiyin FC and NorthEast United FC are gearing up to take on each other in an Indian Super League match, here on Thursday.

At eighth spot with 12 points, the home team has made a recovery of sorts after a nightmarish start. NEUFC are one spot below.

CFC coach Owen Coyle, who has taken over after a beleagured John Gregory parted ways with the club, is hoping that the team will build on the win against Hyderabad FC.

Nerijus Valskis has been the key player for CFC with seven goals to his name so far. His importance for the team can’t be overemphasised and he needs to be at his best if Coyle’s men aim for another victory.

Lallianzuala Chhangte has also been in good form and he will also have to keep performing if CFC has to climb up the points ladder.

Ahead of Thursday’s match, Coyle stressed the importance of making their home advantage count.

“NorthEast are a great team and it will be a tough match for us. They are trying to strengthen their squad. Every game is a tough game in this league. But to go out there in our home stadium, on hour home field, we are looking forward to it and are excited about the challenge ahead,” he said.

“Three of our next four games will be at home. We will try to be consistent, gather the points and challenge for the top four. There will be some tough matches towards the end but that’s the nature of the league. We will focus on the match at hand and if we can win, everyone will feel good about it. We have to be in a good place physically and mentally to win the game,” Coyle said.

Chennaiyin will be missing the services of midfielder Germanpreet Singh on Thursday due to a suspension.

Asked how big a handicap it would be for the side, Coyle said, “We have a solution and we are very comfortable with the solution. I think it will work very well for us.”

The highlanders, on the other hand, have not had the best of times and were outplayed by table-toppers FC Goa in their previous match.

The Robert Jarni-coached side has to improve if it has to challenge CFC and will have to do so with Jose Leudo and Asamoah Gyan out due to suspension and injury respectively.

Speaking about the CFC challenge, Jarni said, “We are expecting a very tough game. Under their new coach, Chennaiyin look like a very good side. But we also believe in our qualities. We must be in the top four and that means we have to work harder.”

“We lost a lot of quality players from the last season. We believe in the younger players. It is a chance for them to get experience which will help them grow into much better players,” he added.

Jarni said the players were improving and hoped NEU FC will end the barren run with a win in Chennai.