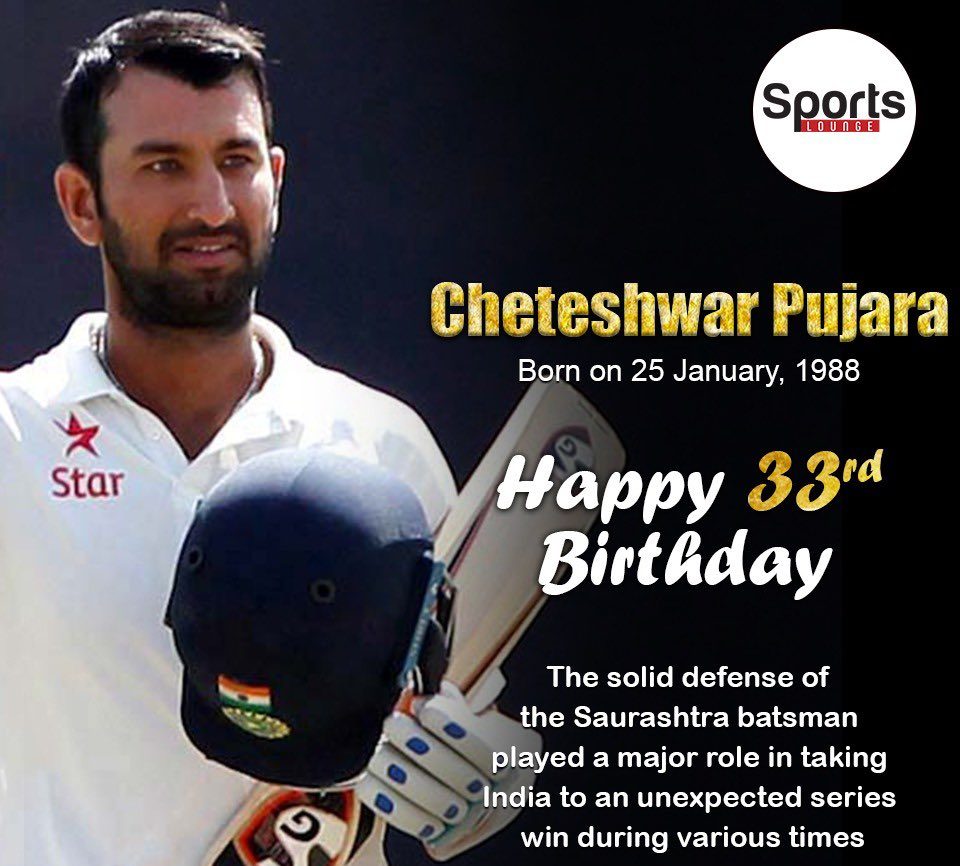 New Delhi: India skipper Virat Kohli and off-spinner Ravichandran Ashwin led the way as wishes poured in for “Rock of Gibraltar” Cheteshwar Pujara on his 33rd birthday on Monday.

Pujara is famous for his solid show with the bat in Test cricket, and taking a cue from how he weathered the storm in Australia in the recently concluded series, Virat Kohli wished the right-handed batsman “more hours at the crease” on his birthday.

“Happy birthday pujji @cheteshwar1. Wish you good health, happiness and more hours at the crease. Have a great year ahead,” Kohli tweeted.

Happy birthday pujji @cheteshwar1. Wish you good health, happiness and more hours at the crease 😃. Have a great year ahead.

How Pujara survived fiery spells from the Australian pace bowlers was the highlight of the fifth day of the fourth Test at The Gabba last week.

Ashwin posted a video to wish Pujara and termed the Indian batsman “Rock of Gibraltar”. In the video, Ashwin’s daughter can be seen extending birthday greetings to Pujara.

“Many more happy returns of the day Rock of Gibraltar @cheteshwar1, can’t thank you enough for being my bunny though,” Ashwin tweeted.

Wicket-keeper batsman Wriddhiman Saha also wished Pujara with a video which is a collage of all the memories the two batsmen enjoyed together.

Former Indian all-rounder Yuvraj Singh sent best wishes to the “brave fighter” on his birthday for the upcoming England series.

“Wishing a very happy birthday Birthday @cheteshwar1 who put his body on the line for the country proud of the brave fight you gave the Aussies! Best wishes for the England series,” Yuvraj tweeted.

Often criticised for his slow approach, Pujara batted like a warrior in the fourth Test against Australia last week. He took blows to the body, fingers, and head, but did not flinch. He stood tall, defying the Australia bowlers who looked for one opportunity to break into the Indian lower-order.

While Pujara registered his slowest ever Test fifty on January 19, it played a vital role in allowing the likes of Shubman Gill, Ajinkya Rahane, and Rishabh Pant to play freely.

Even coach Ravi Shastri backed Pujara, who has three Test double hundreds to his name, including a high score of 206, and squashed any debates that had erupted after the batsman’s slow approach in the game.

“We are not interested in any debates,” said Shastri in the virtual press conference after the fourth Test.

Let's relive one of his fine tons against Sri Lanka 🎥👇

India beat Australia in their own den in the fourth and final Test to seal the series 2-1. It took 32 years and two months, but the unthinkable was achieved as an injury-ravaged young Indian side defeated Australia at The Gabba.

The last time a visiting team came out triumphant from the Brisbane Cricket Ground was back in November 1988 when the mighty West Indian outfit under the leadership of Viv Richards thrashed Allan Border’s team by 9 wickets.

India’s memorable win has also ensured they toppled Australia in the ICC Test Team Rankings to claim the second spot.

The only 'common factor' in back to back series wins in Australia! #HappyBirthdayPujara You have proved to the new generation that not only quality of runs but spending quality time at crease is as important. Have a great year ahead 🎉 #CheteshwarPujara @cheteshwar1 pic.twitter.com/dvQU08hdFc